Daniel Jon Madeiras went home gently and peacefully on Sunday, Sept. 11, 2022, at the age of 77, surrounded by his family and healthcare team. He went from this life to his Savior’s arms, loved, hands held, face embraced, and with music filling the air. 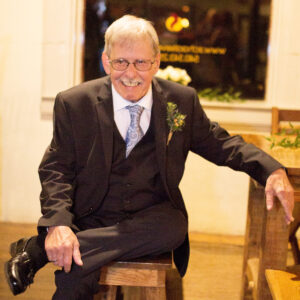 Daniel was born on August 3, 1945, in Oak Bluffs on Martha’s Vineyard, where his grandparents migrated from Portugal. Dan was the youngest of his brothers, David and Donald, who were born to his parents, Roland and Caroline Madeiras. Dan referred to his childhood and early years as one of the best times in history. He would recall it as a time of innocence and the “good ole days.”

In 1963, during the Vietnam War, just before Dan’s 18th birthday, he enlisted in the U.S. Marine Corps. He was a professional trumpet player in the Marine Corps Band, and played in many parts of the world. Dan has fond memories of this part of his service. He was a musician, and his love of music followed him his entire life. Dan did not like to speak about the things that he faced in Vietnam. In speaking of life, he would say, You have a choice. You can see the

glass half-full or half-empty. You can look for the good or focus on the bad. He chose the good, and glass half-full. So instead, he would speak of his love for the Vietnamese children. He would fondly share photos he took of them, and explain how he and fellow Marines would go into the villages to visit and play with them. During Daniel’s service he earned the Good Conduct Medal, National Defense Medal, Vietnam Service Medal with 2 Bronze Stars, and Republic Vietnam Campaign Medal, and later was awarded the Vietnam 50th Anniversary Commemorative Medal.

In 1966 Dan married his childhood sweetheart, Joan Whittemore, and had two sons, Christopher and Jeffrey. In 1976 he married his former wife, Marilyn Pulsifer, and had three children, Danielle, Pamela, and Benjamin.

Dan was known as a trusted hard worker. He worked many trades through the years. One of his first jobs was at the Oak Bluffs airport on the Vineyard. He was even taught how to fly by the owner of the airport. His work included employment as an underwater submarine welder,

Dan spent most of his life as a native of Massachusetts. In 2011, Dan’s daughter Danielle moved to the Blue Ridge Mountains of Virginia. He would stay with her and the grandchildren each spring into summer, and periods throughout the year, until he made Roanoke, Va., his permanent home in 2017. Dan would say it was one of the best decisions of his life. He would enjoy his coffee from his patio while watching the planes once again fly overhead, but this time into the Roanoke airport. Along with his new home came a new love, his beloved companion dog Angel, the papillon. She brought him life and great joy every day! The day before he passed, she had her moment with her daddy, to sit with him once more and bring him joy after 12 weeks of not seeing him due to his extended ICU stay. She really was an angel to him.

Dan was a humble man. He was generous with others, and did not desire lavishness or attention to be brought upon himself. Dan was also a person of conviction, and fought for what he believed in. Dan enjoyed deep sea fishing (in his younger years), bird watching, going to dog

shows with his daughter, reading, music, a lively debate, good food, and video-calling, and he loved animals. His most valued treasures were his family and people. He was most fulfilled when he was surrounded by his children and grandchildren. He especially loved the Christmas festivities and other holidays, being around the big family table. He would sit and take in the moments of liveliness, music, and conversations. He would always leave expressing how blessed he and everyone was, while talking about the events for days to follow.

Every Monday was his special time to talk with his brother Donald and sister-in-law Bertie. Together they shared a special bond. One of Dan’s last hurrahs was when his sons, Chris and Jeff, came to visit him in Roanoke. Along with their sister Danielle, they took Dan for a night on the town filled with laughs, great food, live blues music, and finished it off with a live country band and line dancing! One year before the end of Dan’s life he was able to meet his first

great-grandchild, Elias Daniel. Dan kept the secret of his gender reveal, and loved every moment of it! He loved his great-grandbaby tremendously, and in Dan’s eyes, the world was required to stop for him … and it did.

Daniel was preceded in death by his parents, Roland and Caroline Madeiras; and his brother, David Madeiras. He is survived by his loving brother, Donald Madeiras, and wife Bertie, along with his devoted children, Christopher Madeiras, Jeff Madeiras and spouse Susan Kitner, and Danielle Madeiras Fisher and her husband, Brian Fisher; his many grandchildren, Alyssa and her husband, Zach, Keegan and his wife, Alexis, Brooke, Christopher and his wife, Jessie, Amber, Gabriel, Isaac, Samuel, Kara, Faith-Elizabeth, Frederick, and Daniella; great-grandson, Elias Daniel; nieces, Angie, Tammy, and Sue; and his childhood friends, Ronnie Ferreira and Joan Whittemore.

His daughter, Danielle, would like to extend a special thanks to all from the Salem VA Medical Center who participated in the care of Mr. Madeiras: “You are greatly appreciated and valued. We will never forget all you have done for us and the love our family was shown. We

thank you and love you.”

A celebration of Dan’s life and funeral service were held on Sunday, Sept. 18, at Valley Church in Roanoke, Va. A service of interment took place the following day at the Southwest Virginia Veterans Cemetery in Dublin, Va.

Online condolences may be expressed at johnmoakey.com.