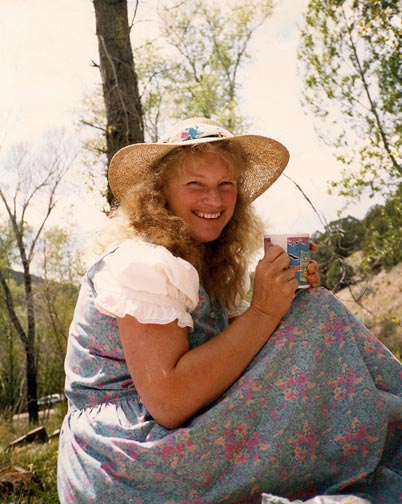 Just at sunset, 8:18 pm on Sunday, August 7, 2011, Elizabeth Gilmore died, surrounded by her loving husband, her children, her grandchildren, and her dogs. She went very peacefully with infinite grace.

From 1970 to 1977 Elizabeth was a childbirth instructor and assisted at many home births on Island. At the time midwifery was radical and innovative in Massachusetts. She had also been co-owner of a leather craft shop in 1971, on Water Street in Vineyard Haven, assisted at Martha’s Vineyard Community Services, and served on the board of the Vineyard Montessori School.

Elizabeth lived on Chappaquiddick with her then husband, Daniel Depperman, and had two children on the Vineyard, Anna and Ezra. Ezra was born at home on Chappaquiddick, the first native-born Chappy dweller in more than half a century.

Elizabeth’s family, the Halls, had had a home on Chappaquiddick for many years prior to her residence there.

Elizabeth was born on September 9, 1947 to Louis E. Stephens and Helen Hall Stephens and grew up in Mexico City and Tepoztlan, Mexico. She is survived by her husband, Carl; her children, Anna, Ezra, and Jan; ex-husband, Daniel; her grandchildren, Jang, Logan, and Hunter; her mother, Helen; and her siblings, Charles, Louis, Alice, and James. She will be missed by a staggering number of people for whom she was a teacher, a mentor, a friend, and often the first person they ever encountered.

The family wishes to thank Elizabeth’s friends who were so helpful and caring during her long illness. Elizabeth’s life touched many people around the world. A Memorial Celebration will be held on September 24, from 1 to 4 pm in the grass courtyard on the South side of the Sagebrush Inn in Taos, New Mexico. In lieu of flowers the family requests donation be made to the National College of Midwifery, 209 State Rd., Taos NM 87571.