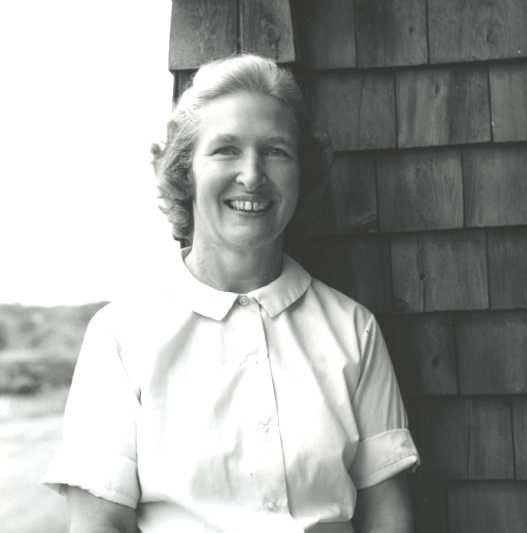 Priscilla was born August 13, 1917 in Springfield, the daughter of Theodore and Marion (Wheeler) Pettingell. She grew up in Dedham. She graduated from Framingham State College with a teaching degree in Elementary Education.

Her first job as a school teacher was in Darien, Conn. She lived with a family in town and belonged to a civil patrol during World War II. The patrol surveyed the neighborhoods at night to make sure all the houses had their windows blacked out.

In the summer of 1945 she took a job as a waitress at Havenside in Vineyard Haven. The man delivering milk to the restaurant was Arnold M. Fischer. They dated over the summer and were married on November 3, 1945.

Following a honeymoon to Niagara Falls, they made their home in West Tisbury. They lived in the big farmhouse at Flat Point Farm, on the Tisbury Great Pond, with Arnold’s parents, Ethel and Albert Oswald Fischer Sr. After their fourth daughter was born they built a small summer camp next door. They rented a house for the winter months from the Ivan Rosenthals in the heart of West Tisbury.

Priscilla began teaching at the West Tisbury School, now the Town Hall, in 1952. She taught first, second, and third grades there for many years. She had all five of her children as students and they all struggled to call her “Mrs. Fischer” instead of Mom. Her many grown-up former students have fond memories of her as their teacher. In 1973 the school moved to its current location and she became principal. She retired in 1976.

In her retirement years she enjoyed travelling with Arn, taking the wool from their sheep to Maine — getting a lobster roll up there was a favorite treat. She knit beautiful sweaters from the yarn made from the wool. Priscilla was a wonderful cook and hosted Sunday night dinners for her family for many years. She loved children and all of her grandchildren were lucky enough to sit in her lap and have her read them a story. She loved reading. Arnold would grow vegetables in his huge garden and Priscilla would cook them or put them up in the freezer.

Priscilla was involved as a Hospice volunteer for many years. The West Tisbury Congregational Church was a constant in her busy life.

She was predeceased by her daughter, Nancy Jane in 1973, her beloved husband Arnold in 1998, her parents, her sister, Ruth, and her husband, Frank Reisdorf, and her brother, Ted.

Priscilla was a great mother, wife, teacher, and friend. She will be remembered fondly by her family, friends, and former students.

Priscilla would have wanted to say thank-you to Elizabeth Sandland and her staff for making her last 4 ½; years as comfortable as possible and for the kindness that was shown to her by everyone at Long Hill.