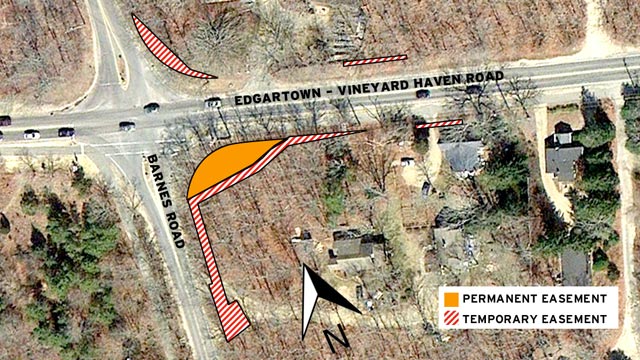 Oak Bluffs officials exercised the power of eminent domainon Monday, to clear the path for the state Department of Transportation to proceed with the construction of the controversial roundabout at the intersection of Barnes Road and Edgartown-Vineyard Haven Road.

Selectmen voted at a special meeting on Monday morning to take five parcels owned by two property owners who refused to negotiate easements needed to construct the project. The four parcels taken for temporary easements will be restored and the easements will expire when the construction project is complete, town officials said.

Eminent domain is a legal process that allows a town to take land from private land owners for public benefit, after paying them fairly for the property. The total cost of the taking is $12,150, including appraisals and survey costs. That bill does not include the cost of legal work by the Boston firm of Goulston & Storrs.

The selectmen’s vote was unanimous. In a separate vote, selectman Gail Barmakian opposed the taking of a permanent easement.

“I thought as a board we have an obligation to bring it to the town,” Ms. Barmakian said in a telephone conversation on Wednesday. “At town meeting it was presented by the engineer as a formality, and that it wouldn’t cost us any money.”

Selectmen voted to temporarily take two parcels totalling 1,140 square feet on the northeast corner of the four way blinker intersection owned by Vineyard Blinkers Inc, the corporation operated by Sandra Lippens, owner of Tilton Rentall. Ms. Lippens declined to comment on the town’s legal action. She has been a vocal opponent of the roundabout project.

Selectmen voted to take two parcels as temporary easements and another as a permanent easement, all owned by Island Housing Trust Corporation, in the southeast corner of the intersection.

The permanent easement was needed to relocate a bicycle path that runs along Edgartown-Vineyard Haven Road.

The Housing Trust had no objection to granting the easements, but the trust leases the land to the three property owners, whose permission was necessary. One of those property owners, Matthew Malowski, opposed granting the easement. Mr. Malowski, assistant principal at the Martha’s Vineyard Regional High School, also declined comment on the land takings. When reached by The Times on Tuesday afternoon, both landowners were unaware of the selectmen’s vote on Monday .

“Although they’re very small, and most are temporary, the whole-right-of-way process is very complicated, more than we thought,” town administrator Bob Whritenour said in a phone interview on Tuesday. “It probably could have been done a little quicker if everybody was totally on board. Most of the property owners were very gracious.”

The town secured several other easements from land owners who voluntarily granted the town rights to cross their property. The Martha’s Vineyard Land Bank and the nearby Youth Tennis Center granted easements without objection, according town officials.

The land taking clears the way for construction of the roundabout, which was delayed while the town proceeded through complex process of surveying, appraisals, and legal filings.

The property owners could challenge the value the town will pay for the easements by filing a lawsuit. Mr. Whritenour said a legal challenge is unlikely, and would not further delay the roundabout project.

The project is expected to go out to bid on August 25, and construction is scheduled to begin in October.

In a June 22, 2011, special town meeting, Oak Bluffs voters overwhelmingly approved a measure to spend $3,000 to secure temporary rights of way for the roundabout. During a lengthy debate, town officials repeatedly assured voters it was very unlikely that the $3,000 would ever be spent. The said they were confident the town could reach agreement with the landowners for easements.

Selectmen authorized four times that amount on Monday. The $3,000 voted at the special town meeting will go toward the $12,150 cost of the land taking. The town will apply for the balance from state highway funds.

“The legal work took a long time; it was very complicated,” chairman Kathy Burton said in a phone conversation on Monday. “We allocated $3,000 for the easements. It did turn out to be more. That is going to come out of Chapter 90 (state highway) funds.”

The roundabout project, begun a decade ago, sparked fierce opposition from a vocal group of opponents near the end of the permitting and design process, which included review and a public hearing by the Martha’s Vineyard Commission (MVC).

The towns of Edgartown and West Tisbury sued the MVC in an effort to block the project, but dropped the lawsuit after spending $34,000 on the legal challenge.