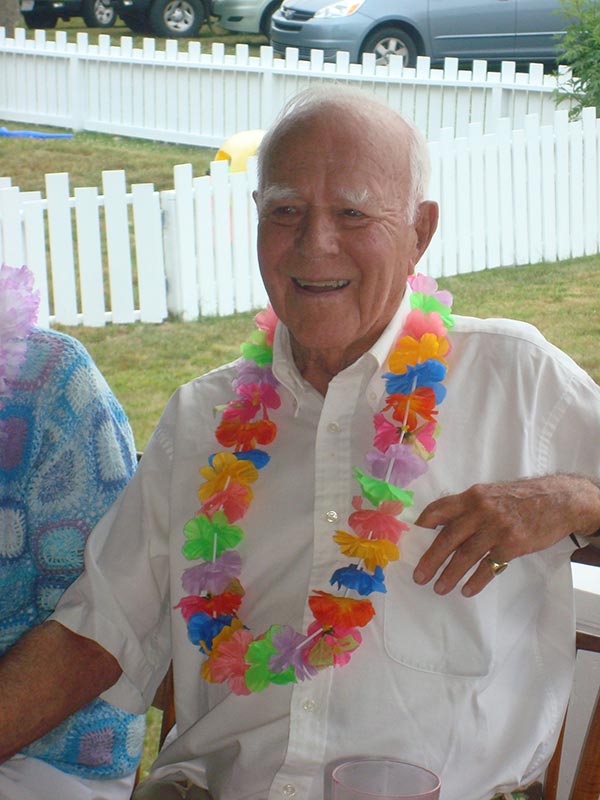 Harold Graham Dripps, of Gladwyne, Penn., and East Chop, died unexpectedly on April 17, 2013, after a brief three-week illness. He was two months shy of his 93rd birthday.

Born on June 26,1920, he was raised on a 375-acre farm in rural Coatesville, Penn., in a house that once was the summer residence of President Buchanan. His childhood aspirations to be a horse jockey were altered when his family moved to Haverford, Penn., in the northwest suburbs of Philadelphia. There he attended the Haverford School, an all-boys prep school born out of Haverford College. And there he met his soon-to-be best friend, Jimmy Wright, who, in ninth grade, introduced Graham to his favorite first cousin, Carolyn Vrooman. It was a love affair that lasted over 60 years, until Carolyn’s death in January 1997. Graham distinguished himself at Haverford as president of his junior and senior classes, president of Student Council, president of the Athletic Association, captain of the baseball team, and a varsity letterman in football. At graduation he was awarded the Key Man Award as the most outstanding member of his class. In the late 1940s he became president of the school’s Alumni Association.

During his high school summers, Graham would visit Carolyn and her family on East Chop where their discrete courtship was featured in Nancy Stephens’s column in the Vineyard Gazette.

Graham attended Amherst College while Carolyn went to Smith College to be near him but, with the bombing of Pearl Harbor, he dropped out of school and joined the navy where he earned his pilot’s wings. He was assigned to the USS Cytheria, bound for the Pacific out of Philadelphia. Two days prior to sailing, in a twist of fate, his orders were changed. The Cytheria was sunk by a German U-boat off the Virginia Capes with all hands lost. Stationed in Morocco, he flew PBYs, a reconnaissance aircraft used to track German submarines.

In March, 1944, he and Carolyn married and, upon conclusion of the war, ironically bought the house in Wynnewood, Penn., next to Helen Wright. Helen was Carolyn’s aunt whose son, Jimmy, had been Graham’s best friend at Haverford. Having lost her husband to a heart attack and her only child to the war, Aunt Helen adopted the Dripps family, bringing them back to the Vineyard. In 1950 she bought the house on East Chop where the ever-expanding family lives today.

After a brief stint as a stockbroker, Graham worked 33 years for Container Corporation of America as a sales representative and packaging engineer. He retired in 1978, spending much of his time volunteering for Meals on Wheels.

News of Graham’s death evoked a wealth of emotion and an outpouring of affection. The unanimous consensus affirms that he was one of the finest, genteel, generous, and personable individuals people have known. Beloved by his surviving younger sister, Elizabeth Royer, as well as his two children, Lyn Herrick and Craig, seven grandchildren, and thirteen great grandchildren, he was a man of great intelligence and wisdom. Unpretentious, unassuming, yet so self-confident, he instilled a serene sense of calm and reassurance in those who surrounded him. As patriarch of the family, he provided an almost divine residential spirit in a summer house filled with four generations of Herricks and Drippses. Even if he were not present, there was always a presence and a sense of order inspired by his unflappable and gracious demeanor. With him around, everything seemed to make sense.

Graham was a master craftsman and woodworker who could cane a chair or make elegant pieces of furniture that now grace the homes of his children and grandchildren. He was an adept mechanic, electrician, plumber, and overall handyman who accepted and even relished the inevitable challenges that would arise. In all his endeavors, he subconsciously whistled a self-composed tune that showed him to be genuinely happy.

Graham was an avid sportsman who played squash, tennis, and golf well into his later life. He was also an accomplished yachtsman. He was a member of the Merion Cricket Club, the Edgartown Golf Club, and the East Chop Yacht Club.

Steadfast in his beliefs, he was a devout and faithful member of the Bryn Mawr Presbyterian Church. With his passing, he is now reunited with the girl of his dreams, and while we grieve, we rejoice in that realization.

Memorial contributions may be made in Graham’s honor to the East Chop Association, Box 1916, Oak Bluffs, MA 02557.

A celebration of Graham’s life will be held at the family house in late July.