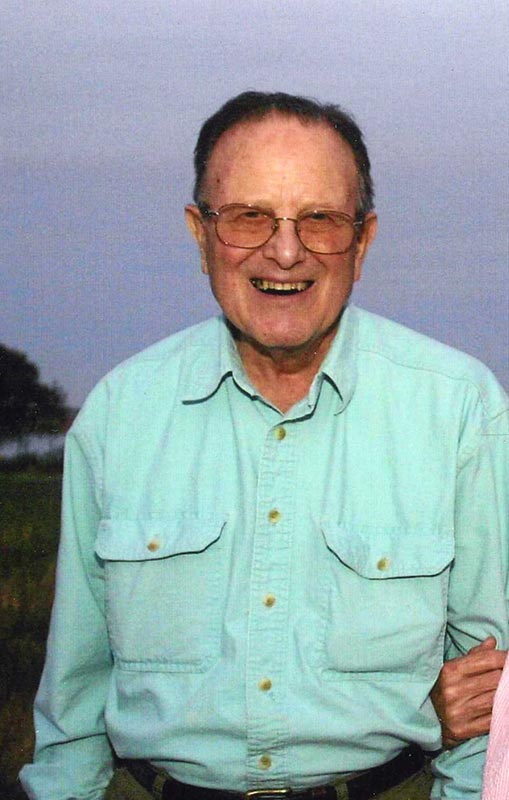 Edward S. Child of West Tisbury died at the McCarthy Care Center in Sandwich on Monday, April 29, 2013 after a short illness. He was 91.

He was born on September 30, 1921, the son of Henry T. Child and Katherine Waldo Child. His sister Helen Child Sykora predeceased him.

Ed grew up in Brooklyn, N.Y., and graduated from the Brooklyn Manual Training High School and began further education at Brooklyn Polytechnic Institute when Pearl Harbor intervened. In January 1942 he enlisted in the Army Air Corps and after training at the Navigational School in Monroe, La., he was sent to the European Theater of Operations in April of 1943 as a navigator on a B-17 (Flying Fortress). He completed 25 missions over Europe and received the Distinguished Flying Cross Air medal with three oak leaf clusters and American Campaign Ribbon. On return from England, Ed earned his pilots wings and was discharged on July 24, 1945.

During the summer of 1945 Ed visited the Vineyard to take part in a wedding at the home of his cousin Hazel Child. The Island so captivated him that he stayed until the fall when he met his future wife, Barbara Cottle. They were married in June of 1946.

He graduated from Rensselaer Polytechnic Institute in Troy, N.Y., as a metallurgical engineer. His first position was at the Baldwin Duckworth Chain Belt Company in Springfield, and they lived in Westfield where they raised a dairy cow plus pure bred Herefords.

The Island called four years later and Ed and family moved to Lambert’s Cove to work and farm and participate in Island life. Ed held many Vineyard jobs in order to stay on the Island, among them car salesman, truck driver, farm worker, land surveyor, and substitute teacher. Eventually he became a sales representative for various companies and travelled Southern New England. His last position was plant manager for the Metallurgical Processing Institute in New Britain, Conn., until his retirement.

Retirement was an opportunity for Ed to take on interesting pursuits. He and his wife signed up for the American Red Cross Disaster Relief program and were sent to the following disaster areas: Nashville, Tenn., after a tornado; Jackson, Tenn., (tornado); Puerto Rico (hurricane); Missoula, Mont., (wildfire); in Kentucky (icestorms); and N.Y. City (9/11). Ed was also a campground host in Anchor River, Alaska, and he studied moose on the Wildlife Sanctuary on the Kenai Peninsula in the 1990s. But his heart was always with the “Cove.” He loved long walks on the beach, time with his sons, and studying nature.

Services are planned for Sunday, June 9, at 2 pm at the Lambert’s Cove Cemetery with military honors provided by the Veterans of Martha’s Vineyard and a Masonic Funeral Service performed by the Oriental-MV Masonic Lodge.