The day after Thanksgiving, wooden boatbuilder Nat Benjamin and a crew of four set sail from the Island of Martha’s Vineyard for Cuba, with a planned one-month stop in Haiti. The 1,550-mile open-ocean journey in Mr. Benjamin’s Island-built schooner Charlotte traversed time and culture, and rekindled Mr. Benjamin’s love of Cuba, a nation he first visited 14 years ago.

Mr. Benjamin, a well-known wooden boatbuilder and a partner in Gannon and Benjamin Marine Railway, brought wooden boatbuilding supplies and sails for local Haitian boatbuilders, and donations from Islanders for the children of L’Oeuvre St. François d’Assises, an orphanage, a hospital, and a school on Ile a Vache that is the lifework of Sister Flora Blanchette, who takes in all children.

Mr. Benjamin and his wife, Pam, first traveled to Cuba 14 years ago. They stayed with a family for a week, traveling through the country, struck by the elegant Spanish architecture and iconic, pastel-colored 1950s American cars.

Over the years Mr. Benjamin had heard about friends sailing to Cuba to explore the rugged coastline and clear waters. They reported a welcoming populace and no problems with Cuban officials.

Lured by the unique culture and seafaring adventure Cuba offered, Mr. Benjamin decided to return in his 50-foot wooden schooner, Charlotte. He decided to sail Charlotte first to impoverished Haiti, and then to Cuba, packed full of donated clothes, food, financial support, and tools that would be welcome in both Caribbean countries.

Although recent political developments between the U.S. and Cuba may appear to have cracked the door open to a nation long off-limits for Americans, currently it is still illegal for Americans to travel on vacation to Cuba. Mr. Benjamin began his quest for a travel license two years ago.

Mr. Benjamin said he took all the necessary steps to file for a license to legally enter Cuba. There are many categories under which a U.S. citizen can enter Cuba. These include a family visit, educational activities, athletic competitions, and humanitarian projects.

He went back and forth with the Department of the Treasury for two years, fulfilling all application requests. “I applied for a permit last summer, I was denied,” he said. “I applied again, and never heard back from the OFAC (Office of Foreign Asset Control) Treasury office.”

He hoped to visit Cuba on humanitarian grounds. His plan was to work with boatbuilders near Trinidad, on the south side of Cuba. His application languished. He heard nothing.

This fall, with a decision still “pending” and with Charlotte packed with numerous donations and a crew yearning for warm weather, Mr. Benjamin decided to set sail in hopes that the humanitarian nature of his trip would trump any troubles.

Mr. Benjamin said he and his wife did a tremendous amount of fundraising before they left. Thanks to many generous Island residents, they collected food, clothing, and supplies. They packed Charlotte and waited for fair winds.

The crew that departed in the midst of late-Thanksgiving flurries included Mr. Benjamin; Brad Abbott, a partner in the G&B boatyard; Ian Ridgeway, captain of the Alabama and captain for the voyage down; Malcolm Boyd; and Zoli Clarke.

With a stiff northwest breeze at her back, Charlotte took to the cold Atlantic. The first 36 hours of the trip were brutally cold. Mr. Ridgeway recounted in a blog (captainfootfoot.tumblr.com) he maintained during the trip: “We raced down Vineyard Sound on one tack with the wind on the quarter, and were out of sight of Gay Head in no time at all, everyone piling on layers as we were realizing just how cold the North Atlantic would prove to be.”

After four days out on the wintry Atlantic, the crew stopped briefly in Bermuda to resupply. Charlotte embarked full of provisions for the next leg of the voyage. A strong northeast wind made for swift sailing. As days passed, crew members fell into their daily routines.

“We shared the cooking depending on who was inspired or hungry, alternated watches, and, before long, time became quite elastic,” Mr. Ridgeway wrote in his blog. After a few day on the high seas, they rounded the west coast of Haiti, headed for the small island of Ile a Vache.

Pam Benjamin flew down to meet her husband. She delivered donations to the children of Sister Flora’s orphanage, which serves as a home for 60 children.

Mr. Benjamin shared his building knowledge with the Haitian people he met, and donated tools and sails to the local fisherman and boatbuilders.

“In Haiti you can make such a difference so easily; they really have nothing,” Mr. Benjamin said.

Ian Ridgeway agreed. “The people were happy, polite, and beautiful, and though they didn’t have much in the way of commodities, they all seemed to live rich and happy lives,” Mr. Ridgeway said.

About one month after they arrived, the crew of the Charlotte, minus those who departed by plane for home, left Haiti on Jan. 16, bound for Cuba with a planned stop in Port Antonio, Jamaica, to refuel.

The crew received a warm welcome, and immediately bonded with members of the wider sailing community at anchor in Port Antonio. “Warm salty air, good conversations, rum punch, and, of course, some reggae music playing through small portable speakers made for the perfect first evening in Jamaica,” Mr. Ridgeway wrote in his blog. “However, at about midnight the crowd had thinned to only a few, and so I slipped away with understated goodbyes, and, as Nat likes to say, ‘put my bones on the shelf.’”

The visit to Jamaica included a visit to the home of national music hero Bob Marley. Leaving the reggae tunes behind, Charlotte continued northwest to Cuba.

Mr. Benjamin was unsure what kind of welcome they might expect entering Cienfuegos, a port along the south coast of Cuba. Their timing was perfect. The embargo that had frozen U.S.-Cuba relations for 50 years was beginning to thaw.

“We arrived in Cuba the same day that the American intentions to revoke the embargo were announced, so they were beaming when we came in,” Mr. Benjamin said. “They were especially welcoming to the boat and the crew.”

He continued, “I really enjoy the people, so nice and helpful; they have had a rough time with American politics, yet they have no animosity toward the American people.”

The opportunity to return to Cuba provided Mr. Benjamin an opportunity to share its beauty with his fellow crew members. He said that Cuba exceeded every expectation, with European planned cities, wide boulevards, and timeless culture.

“I love that they don’t just tear down the old buildings,” Mr. Benjamin said. “They restore the buildings, preserving the beautiful Spanish colonial architecture.”

While in Cuba, Mr. Benjamin traveled throughout the country and shared his boatbuilding experience. He was able to contact wooden boatbuilders in the Cuban city of Trinidad.

Mr. Benjamin said Cuba’s wooden boatbuilding industry is not well known outside the country. He partnered with some boatbuilders, hoping to learn about their work, and donated much-needed tools.

“Cuba presents its own unique set of obstacles for the boatbuilders,” he said. “Communist policies limit many freedoms.”

Early last month, Mr. Benjamin flew back to the Vineyard for a brief stay. He returned to Cuba two weeks ago to rejoin Charlotte for her return voyage in mid-April.

Mr. Benjamin has high hopes for the future of relations between Cuba and America. “I think it’s about time that they change the policy; it is a failed policy to begin with,” Mr. Benjamin said. “I think the Cubans are smart enough not to roll over for the highest bidder of American hotels, and they will be very sensitive in how they develop the country. The people we talked to, they value their heritage and culture, which is so cared for and pristine.” 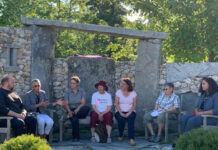