When West Tisbury artist Valentine Estabrook decided to depart from her landscaping painting, the direction she chose took her far afield from her usual choice of subject, Vineyard landscapes. Very far afield. In her latests series of abstract and partially abstract paintings, Ms. Estabrook has focused on images from outer space.

The series, titled SPACEWALK, is currently on display at the West Tisbury library, and features colorful images based on photos taken from the Hubble Space Telescope.

“I was inspired by their immense beauty,” says Valentine of the hundreds of cosmic images that she viewed in preparation for the series. “It [the Hubble] is circling the earth and taking these incredible photographs.”

For the SPACEWALK series, the artist has either interpreted specific images or drawn inspiration from others. “Some of them are my impressions taken from the Hubble of nebulas and galaxies,” she says. “The other half are pieces that came out of my head. Those are truly abstract.”

“I always have an abstract series going,” she adds. “I just enjoy it so. It’s a nice break from the landscapes if I get stuck.”

The paintings benefit from both the mystery of an abstract and the familiarity of representational work. Even in the images created purely from her imagination, one can picture the galaxies, stars, and black holes of space. In a press release for the show, Valentine comments on the photos that inspired her current series: “Ethereal, breathtaking, explosive and peaceful in nature, the photos are astoundingly clear, precise and so very real.”

Not only is the subject matter unusual, but the media that Valentine has selected is unique. She applies the paint with abaca paper, a product made from the fiber of banana trees that is often used for making teabags. Valentine manipulates small pieces of the fibrous paper to create various effects. She discovered the potential of abaca as a tool for artwork after taking a class with Sandy Bernat at Seastone Papers.

“I was just fascinated with the capabilities of the paper,” she says. “How it absorbs. How I could create colors on colors.”

The artist explains her process. “I cut up the paper into various sizes and crunch it up. I work with acrylics rather than oil because I need something that dries quickly and I like the intensity of color. I dip the paper in the paint and start applying.”

The process gives the images the appropriate look of dust clouds and floating particles. The layers of color create a sort of three-dimensional appearance.

“There’s a delicacy in building up colors,” says Valentine. “You get a bunch of

little dots and slashes that the paper puts down. When that dries, I can do it again in a different color. I just keep working it up. Paper almost gives you the feeling of sculpting. It’s a wonderful exercise in color and in creating depth and form.”

Valentine studied painting at the Chicago Art Institute, the Kansas City Art Institute, and the Art Students League of New York before pursuing a successful career as a television producer and director in New York City. It wasn’t until she relocated to the Vineyard in 2003 that she took up painting full time. She showed her landscape paintings at the Vineyard Artisan’s Festival for many years before opening her own gallery in the studio on her West Tisbury property. The artist also shows her work at the Old Sculpin Gallery in Edgartown, and has exhibited in galleries in Westchester, Provincetown, and various galleries in California.

The show at the library will give Valentine a chance to show another dimension to her painting, and display a longtime fascination in terms of the subject matter. “I’ve always loved space,” she says. “As a little girl I  thought things would keep moving along at a rapid pace and I would be able to travel in space one day.” 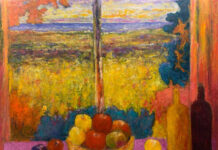