As a student at Georgetown High School, Teresa Kruszewski dreamed of moving from the small town north of Boston and following her passion: working in the fashion industry. She graduated from Seton Hill University in western Pennsylvania with a major in fashion merchandising and a minor in art. For years she worked at Filene’s department store in Boston, and in 2005, she moved to New York City to work in the fashion district.

“I had always wanted to live in New York,” Ms. Kruszewski said in a recent conversation with The Times. “But about six months into it, I was sitting in a cubicle in the fashion district thinking, There has to more to life than this.”

She started working on her photography more and more, traveling to nearby art shows when she could.

“Those white-tent events,” she said, “in the Hamptons, and outside of D.C. Then in

2008, I went cold turkey and took the big step, going from the corporate, structured life to waking up and doing whatever I wanted. There have been bumps, but they’re all mine.”

Ms. Kruszewski took another leap of faith after visiting her sister, Dona, on the Island last summer.

“An artist here told me that if I was going to be an artist, that I needed to give myself some time to slow down,” Ms. Kruszewski said. “I moved here in December 2016, and it’s beautiful, it’s quiet. I’m looking forward to being here and having the time to work on some of the projects I have in the queue.”

With commercial, editorial, and artistic photography gigs already in the works, Ms. Kruszewski is settling right in. She is a freelance photographer for The Times as well. But it’s her gallery, 51art, located in the “shoppe with the red door,” that is her current passion.

The gallery is located on Vineyard Haven Harbor on the Beach Street extension, across from the Black Dog Tavern, along with a handful of other creative endeavors.

“There’s a custom tailor, a clothing designer, a graphic artist, a jewelry designer, a painter,” Ms. Kruszewski said. “We’re part of the cultural district, and I’d like to see more people coming through.”

In that vein, Ms. Kruszewski is kicking off what she hopes will be a monthly event, Second Thursdays, on March 9. She’s hosting an open house at 51art from 6 to 7:30 pm, and is encouraging her neighbors in the building to stay open later that evening as well. There will be wine, chocolate, and jazz, she explained, courtesy of her sponsors for the event — Not Your Sugar Mamas; the Barn, Bowl and Bistro; and Our Market. This month’s event will focus on Ms. Kruszewski’s black-and-white photography. She said she hopes to feature other photographers’ work in subsequent Second Thursdays.

The gallery is a small space with black-and-white decor that echoes the framed black-and-white photos. She shoots with black-and-white film, saving the color digital process for her commercial work. Ms. Kruszewski’s photographs reflect trips to Coney Island and the beach. There’s everything from intimate portraits to close-ups of flowers, to a woman packing aluminum cans into a grocery cart.

“Wherever you go, you can find something beautiful to take pictures of, but if you’re just taking pictures, why?” Ms. Kruszewski said. “That’s not being a photographer or a storyteller, or someone trying to convey something. It’s like putting noise out there. When you keep taking pictures, try to find something different about it, the time of day or a point of view.”

Ms. Kruszewski spent a week in Wyoming last spring camping and journaling about the experience, along with shooting 20 rolls of film. She’s interested in the story behind the photographs.

“I want to go back and read through it and put the pictures with the story,” she said. “Especially considering what’s going on now politically with protecting the environment.”

Along with growing her photography business in New York, Ms. Kruszewski joined the American Society of Media Photographers while she was there, and took photojournalism and documentary filmmaking classes. One of the personal projects she’d like to get off the ground while she’s living on the Island is a documentary about her grandmother, who decades ago purchased one of the houses along the Jersey Shore that was hit by Hurricane Sandy.

“It devastated the section where she lived,” Ms. Kruszewski said. She said she’ll interview family members to help her tell her grandmother’s story.

“Those self-driven projects take time,” she said. “That’s part of being here, getting those off the ground.”

Second Thursday is March 9, from 6 to 7:30 pm, at 51art Gallery in Vineyard Haven on the harbor. Ms. Kruszewski’s website is theshoppewiththereddoor.com. 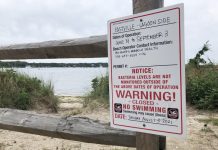 Eastville Beach closed due to bacteria