A predicted rain storm, which could include thunder and lightning, is forcing the Oak Bluffs Fire Department to move its annual show to Sunday at 9 pm, Fire Chief John Rose told The Times.

“With a thunderstorm predicted, we just don’t want to take a chance,” Chief Rose said.

The fireworks could have been moved to Saturday, but rain is in the forecast until late morning, which wouldn’t provide enough time to set up the display and get it ready for that night, he said.

All parking plans remain the same for the event.

As a result of the change, the Steamship Authority has diverted some trips on Sunday to Vineyard Haven. Those trips include:

Meanwhile, the change in the fireworks is displacing a “Rally for Unity” that had been planned by Indivisible MVY. That rally “to join and stand in solidarity against the racism, anti-semitism, and hatred on display in Charlottesville” is now scheduled for Saturday from 4 to 5 p.m.

The rally is being held at the Civil War monument in Oak Bluffs.

Editor’s note: Updated to include change in plans for rally and ferry schedule. 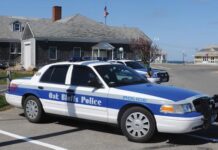 Springtime for Turkeys in Vineyard Haven

Painting a picture of an Island in crisis