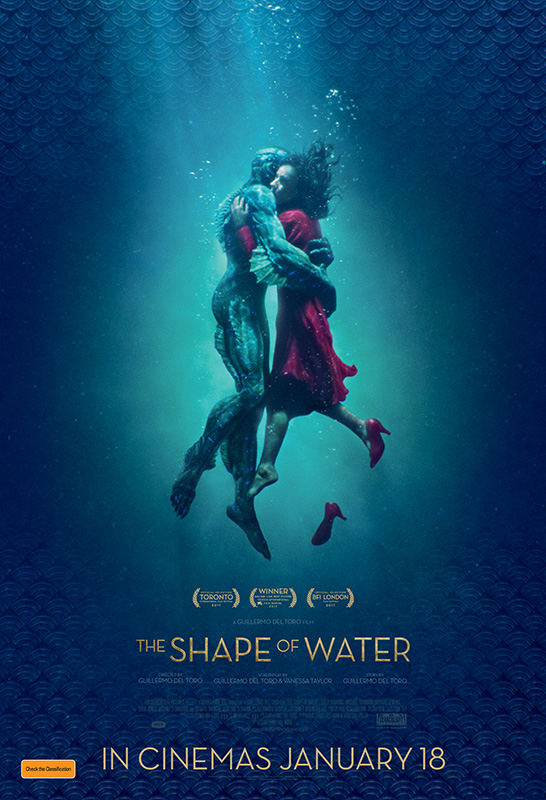 “The Shape of Water,” already crowned with two Golden Globes and a near-record 13 Oscar nominations, plays at the Martha’s Vineyard Film Center this weekend and next week. Written and directed by Guillermo del Toro, this enchanting fairytale stars the remarkable Sally Hawkins. Along with “Maudie,” this is her second outstanding performance this season. She plays Elisa, a mute who works as a cleaner at the government’s Occam Aerospace Research Center in Baltimore.

The year is 1962, at the height of the Cold War. Richard Strickland (Michael Shannon) has captured an aqua monster in South America, and brought it to the Research Center for study. Doug Jones, who appeared in del Toro’s other magical film, “Pan’s Labyrinth,” plays the monster. Called the Asset, he is chained in a water tank, and Strickland uses a cattle prod to control him. Strickland, who drives a Cadillac, reads “The Power of Positive Thinking” and services his wife like a robot, is the movie’s real monster. A vicious man, he verbally abuses Elisa and her co-worker Zelda (the ever-appealing Octavia Spencer, who also appeared in 2016’s “Hidden Figures”).

Establishing the daily routines of Elisa’s life, “The Shape of Water” builds gradually. Elisa watches musicals with her next-door neighbor Giles (Richard Jenkins), a closeted gay artist whose advertising career is on the skids. Mornings before work, she bathes and pleasures herself before dressing and taking the subway. Her best friend and fellow cleaner Zelda makes sure Elisa clocks in punctually. The two are frightened by the monster and horrified by Strickland’s abuse of him. Elisa in particular is fascinated by him, and because he can’t speak, she feels a special kinship with him. She brings him hard-boiled eggs and teaches him sign language, as well as playing music for him and dancing.

Dr. Robert Hoffstetler (Michael Stuhlbarg, who also appears in “Call Me by Your Name”) feels more sympathy for the creature, trying to persuade Strickland and General Hoyt (Nick Searcy) to recognize his human qualities. In Cold War fashion, it begins to be clear that Hoffstetler is a spy feeding information to the Russians.

Before long, Strickland and Hoyt decide to dissect their Asset, who has a limited breathing capacity as well as gills, rather than keep him alive. When Elisa finds out, she hatches a plot with Zelda and Giles to whisk away her newfound love to her bathtub, where their relationship is consummated. The plan is next to release him into Baltimore’s harbor.

What begins as a combination horror tale à la “Creature from the Black Lagoon” and romantic fantasy like “Beauty and the Beast” turns into a suspense story. Strickland discovers Hoffstetler’s true identity and acts on it. Then he chases down Elisa, Zelda, and Giles.

“The Shape of Water” resonates with issues like homophobia, racism, and intolerance, yet it does so without heavy-handed moralizing. It balances the world of imagination with elements of realism, using cinematography and editing to celebrate the magic of water and light. As its heroine, Sally Hawkins radiates an inner beauty that transforms her plain features. She, along with Octavia Spencer and Richard Jenkins, deserve their Oscar nominations, as does del Toro, and the film its Best Picture nomination, and many others for technical achievements.

*This story was updated to correct the name of the film’s writer/director. It is Guillermo del Toro, not Benicio del Toro.