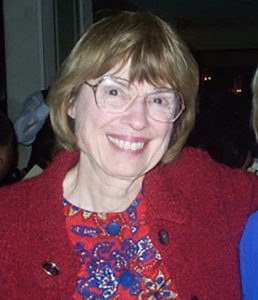 An artist, activist, and sixth-generation Martha’s Vineyard summer resident, and 30-year full-time resident, Barbara was born in Upper Montclair, N.J., on Jan. 14, 1934, to Ethel “Pat” Blackwell Jones and Charles D. Whidden. A devoted wife, mother, grandmother, and dedicated member of the extended Blackwell family, Barbara spent every summer of her life enjoying the waves of Stonewall Beach and the waters of Nashaquitsa Pond on the Vineyard.

Barbara’s love of the arts was woven through her life from an early age. At 10 years old she began studying painting at the Montclair Museum. She acted in plays in high schools in New Hampshire and Maine, and at Wheaton College in Norton. She was the editor of both her high school and college literary journals. After graduating from Wheaton in 1956 with a major in English, she lived in San Francisco and worked in advertising. She left San Francisco for Cleveland, Ohio, where she became a member of the Cleveland Play House and starred as the lead in “A Mouse Trap” and “A Streetcar Named Desire” with a notable cast of repertory partners, including Alan Alda. During this time she continued to hone her skills as a portrait and landscape painter.

Barbara moved to New York City several years later, and worked for the DuPont Co. and at Lincoln Center for the Performing Arts. She studied acting in the evenings, painted on weekends, and volunteered at the New York Infirmary, which was founded in the 1860s by two of her great-great-aunts, Emily and Elizabeth Blackwell. While volunteering at Bellevue Hospital, Barbara met her husband of 54 years, Bob Day, who was studying at the General Theological Seminary and doing pastoral counseling at the hospital. Barbara recalled early lunch dates with Bob in the Bellevue cafeteria. In 1963 the pair married and moved to Boston, where Bob continued his degree at Harvard Divinity School and Barbara worked in the school’s development office. When he became headmaster of the Advent School in 1965, the couple moved to Beacon Hill. Barbara earned her brokerage license, and became an assistant vice president of the March Co., a small private investment company, until 1986. Barbara served on the boards of the Boston and Massachusetts Society for the Prevention of Cruelty to Children, Hill House, the Beacon Hill Community Center; and Boston Classical Orchestra. She helped establish a library at the Suffolk County Jail.

Upon Bob’s retirement in 1995, the couple moved to their West Tisbury house, remaining politically active and deeply involved in the community. Barbara served on the boards of Sheriff’s Meadow Foundation, West Tisbury Roadsides Committee, and the Bus Committee, and Friends of the West Tisbury Library. She was an active member since 2001 of the Want to Know Club, the Martha’s Vineyard Garden Club, and Friends of Mill Pond. In 2008, she traveled to New Hampshire to support candidate Barack Obama. She arranged and supported numerous events for local and state political candidates, and was chairman of the first political action committee on the island, Citizens for the Martha’s Vineyard Commission.

Barbara continued her passion for capturing Vineyard landscapes with paint and brush, selling her works at the Granary Gallery, Artwoods, and craft fairs around the state. Bob lovingly sanded and prepared wood boxes for his wife’s art. Often holding hands, the couple were very much a team, and enjoyed frequent trips to Boston for theater and orchestra performances, long nature walks, leisurely dinners with family and friends, and healthy political and intellectual discussions. Bob died 11 weeks prior to Barbara, on Jan. 17, 2018.

Whether she was hosting a lively dinner party, playing board games, teaching painting to her grandchildren, writing poetry, or pointing out the play of colors dappling her backyard, Barbara’s wit, creative spirit, love of small furry animals, and devotion to family and friends old and new will be greatly missed. She relished travel to distant countries just as much as she cherished visits with her children and grandchildren, and afternoon tea with friends.

In her final days, Barbara drew much joy from recalling walks in the Boston Common and winter holidays on the Hill, as well as summer days on the Island picnicking and jumping waves with her cousins, both as a child and later with her children and husband.

Barbara will be greatly missed by her three children and their families, Catherine and David Carlson of New York and children Jessica, Luke, and Scott; Elizabeth Churchill of California and children Frederick, Robert, and Lucy; and Matthew and Tracy Day of Florida and children Jackson, Garrett, and Caroline. Barbara was predeceased by her husband, Robert Charles Day, her brother, Samuel Blackwell Whidden, and her son-in-law, John Tower Churchill.

A memorial service for Barbara and Bob Day will be held at Grace Episcopal Church, Vineyard Haven, on the afternoon of July 14. More information will be announced closer to the date. In lieu of flowers, donations in Barbara’s name can be made to the West Tisbury Library Foundation at wtlibraryfoundation.org.