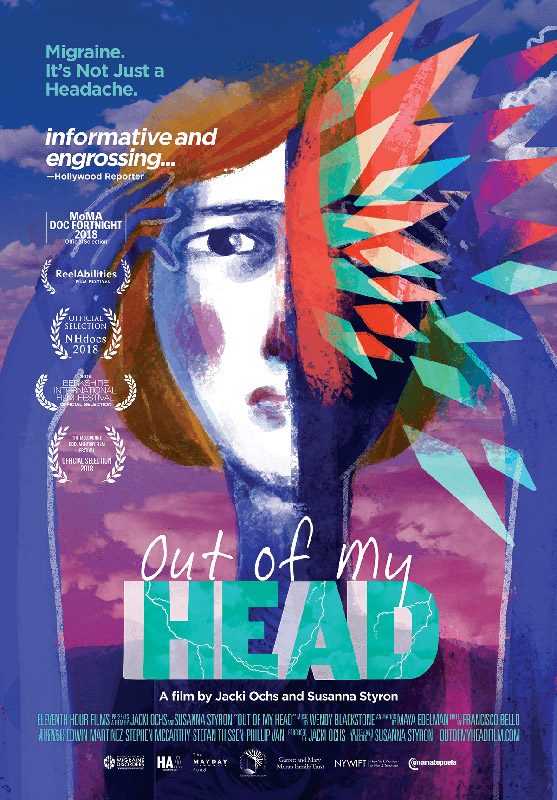 “Out of My Head” screens on Wednesday, August 8, at 7:30 pm in a special event at the Martha’s Vineyard Film Center. Director and longtime summer visitor Susanna Styron, daughter of the novelist William Styron, explores the migraine — the worst kind of headache — inspired by her daughter’s experiences with the perpetual, disabling pain.

Styron is an awardwinning documentary and film director, and provides a thorough investigation into the devastating world of people living with migraines. Visual auras, flashing lights, and nausea are among the many side effects of the disease. Those who don’t understand its severity may discount having migraines as an imagined illness. Some sufferers experience aphasia, which is the inability to express or understand language. It’s a disease that has become resistant to medications.

Styron uses animated drawings illustrated by Maya Edelman to enhance the narrative. Many figures throughout history have suffered from migraines, including Virginia Woolf and Georgia O’Keeffe. Particularly compelling is Styron’s sequence showcasing a TV reporter having a migraine on the air.

Lewis Carroll’s “Alice’s Adventures in Wonderland” is thought to have been inspired by migraines, as well as German Benedictine abbess Hildegard von Bingen’s visions. In author Joan Didion’s essay “In Bed,” she writes about her migraine experiences. “When I say a headache, I don’t mean just a headache,” she wrote. “I mean something that would totally brutalize you.”

Botox may alleviate migraines, as well as CBD, the nonhallucinatory element of marijuana. Aimovig, a new drug recently approved by the FDA, holds out hope for reducing the number of migraines people experience.

“Out of My Head” is well-made and informative, and a must-see for anyone who experiences migraines. Styron will attend the screening, along with producer Jacki Ochs.

For more information and tickets for “Out of My Head” and other films at the Film Center, the Capawock, and the Strand theaters, visit mvfilmsociety.com.