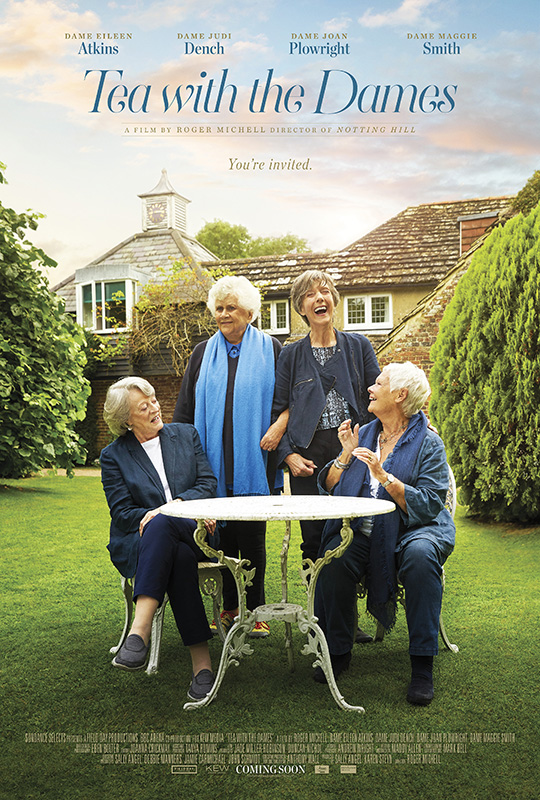 “Tea with the Dames” returns to the Martha’s Vineyard Film Center on Friday, Oct. 12, after a popular screening during the International Film Festival last month. This enjoyable documentary provides a welcome relief in these perilous times.

The four English dames featured in the film are Judi Dench, Maggie Smith, Joan Plowright, and Eileen Atkins. “Dame” is a title given to a woman equivalent to the rank of knight in the U.K. All four women play themselves, and are in their eighties. They’re full of life and insights after remarkable careers, and gather annually at a country cottage in Sussex — the home Plowright shared with her husband Laurence Olivier. The film is loaded with salty reminiscences, gossip, and plenty of laughter.

The documentary opens with each woman tuning their voice. Director Roger Michell lets the camera run, while the four hold forth. They talk about how they became actors, and how they met each other. Dialogue is met with archival footage from their childhoods and early performances. None of the women are free from stage fright. Atkins reminisced on being on her way to the theater and asking herself whether she’d rather get in an accident. But Dench points out that fear is the petrol that powers acting. Each dame has played in Shakespearean works, and Smith recalled starring as Desdemona in “Othello” alongside Olivier. She said it was the only time she saw stars, because Olivier slapped her so hard in one scene. Plowright, the oldest at 88 and now blind, is no longer able to perform, but recalled feeling “second fiddle” when she acted with her husband, because everyone came to see him. She told a funny story about their son Richard, who took the keys to the liquor cabinet. Her husband demanded, “Where are the keys to Daddy’s num-nums?”

All four of the actresses observed they are not in the first rank of “the world’s beauties,” but agreed it doesn’t matter. When the director asked what advice they would give their younger selves, each dame had an interesting answer. “Get in touch with yoga and mindfulness and learn about the brain,” Plowright said. Atkins advised not to be bad-tempered or confrontational, and to listen more. Smith said, “When in doubt, don’t.” Dench touched on romance,“Try not to be so susceptible to falling in love.”

Dench has remarkable skill at reciting lines from long-past performances, including the famous speech “We are such stuff as dreams are made on,” from “The Tempest.” They all cut their teeth on theater, and view their film careers more or less as afterthoughts. Americans are probably most familiar with their films.

Fans of the four will particularly enjoy clips from their performances. They include Plowright’s Tony-awardwinning “A Taste of Honey” on Broadway, and her movie roles in “Tea with Mussolini” and “101 Dalmatians.” Atkins played many roles with the Royal Shakespeare Company, and was responsible for the precursor to “Upstairs Downstairs.” Her television and film work includes “Smiley’s People” and “Cold Mountain.”

Smith and Dench enjoy a friendly competition for having the most movie credits. Smith is a six-time Oscar nominee, and starred in “The Best Exotic Marigold Hotel.” She is probably best known as Lady Violet Crawley on “Downton Abbey,” and as Minerva McGonagall in the “Harry Potter” film series. Dench is a seven-time Oscar nominee who won for best supporting actress in “Shakespeare in Love.” Dench has played “M” in the James Bond films, and most recently, in “Victoria & Abdul,” as well as “Murder on the Orient Express.”

The only limitation to “Tea with the Dames” is that it is too short. There’s always a chance, though, for an equally pleasurable sequel.

For more information and ticketing to this and other films at the MV Film Center, Capawock, and Strand Theater, visit mvfilmsociety.com.