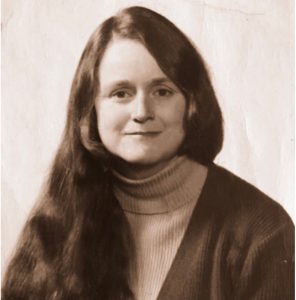 After her father died in 1941, Bobbie, her mom, and sister Jean moved from their Ocean Heights home to live with her grandparents, Orin Norton, blacksmith, and Elsie Maude Shurtleff, on their farm in Edgartown.

Her favorite memories from childhood were the smell and look of her grandfather’s apple orchard in bloom, swimming in Yvonne Canha’s water ballet classes at the Bend in the Road, tap dance classes, helping her grandfather prune the apple trees, ringing the bell at the Methodist Church with her sister Jean and her grandmother on the day WWII ended, and her first-ever trip off-Island to Boston with her mom and sister after the war, when she was 8 years old.

She attended the Edgartown School, where she excelled scholastically, played the clarinet, and was valedictorian of her 1954 graduating class, and in her high school years was a cheerleader for the basketball team. She was a quiet, calm, self-confident, reserved girl. In seventh grade she met an extremely outgoing, exuberant, loud boy, who, although he was smart enough, never applied himself to school work, named SteveTilton. She was not impressed. Her view of Steve changed at some point, because they ended up marrying.

After high school and before marrying Steve on Sept. 20, 1956, she completed a two-year course in medical administration at the Chandler School in Boston while living at Bethany Union, a rooming house on Newbury Street. In the summers she worked for Dr. Nevin in Edgartown, and also as a telephone operator.

After she married Steve, and starting out with the $1,000 she had saved up working for Dr. Nevin for two summers, she and Steve lived in Edgartown, had their first child, and then moved to Minnesota in January 1959, where Steve’s brother David and his family were living. Bobbie flew with their 4-month-old, Stephanie, and Steve drove his 1941 convertible red Plymouth with all of their possessions, including their wedding gift from Bobbie’s sister Jean, a cocker spaniel they had named Zeb after Steve’s great-uncle, Zeb Tilton.

In 1973, Bobbie and Steve built a waterfront home on Sunset Lake, a few miles north of White Bear Lake, Minn. From that point on, they always lived next to water: Edgartown Harbor, the Ohio River in Jeffersonville, Ind., and Narragansett Bay in Rhode Island.

Her great passions in life were her family, gardening, cooking, her pets, traveling, reading, swimming at Bend in the Road Beach when she visited the Island, and all of nature. She loved trees, any flowering plant, knew the names of roadside weeds, and when growing vegetables in her 20s and 30s, was always on the lookout for the best manure.

Bobbie loved to cook, and used cookbook recipes for inspiration to create her own delicious dishes. The one creation that will be missed the most is the caramel pecan cinnamon rolls she always made for Christmas breakfasts.

Her travels took her to Japan, Hawaii and 36 other states in the U.S., Sweden, Denmark, Ireland, France, Italy, Bermuda, a Caribbean cruise with her sister-in-law Carolyn, and a 40th wedding anniversary trip with Steve to the coast of British Columbia.

One of Steve’s nicknames for Bobbie was “Queen of the One-Liners.” She always said she had to be short and quick with any comments, because she rarely had an opportunity to speak when he was in the room.

A graveside service was held July 11 in the New West Side Cemetery in Edgartown.