Vera Shorter died at her home on Martha’s Vineyard on Feb. 26, 2021, with her two daughters nearby. She was born in Huntington, Long Island, to Sue Hendrickson and Claude Groves in 1922, and had celebrated her 98th birthday in December with her 97-year-old friend Betty Dixon. 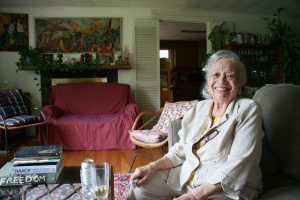 Her mother’s family lived on Long Island for over a hundred years, and were of Black American and Shinnecock stock. Her mother was a born musician, who with the help of her mother’s madam, learned to play the piano at an early age. Her father, 14 years older than her mother, was a WWI veteran who had fought in the 369th Infantry, commonly known as the Harlem Hellfighters. Due to the segregation of the American Army at the time, the 369th Infantry fought with the French, and won the Croix de Guerre for its heroism. Her mother’s musical talent would get the family through hard times by her work in nightclubs, bars, and churches. Vera was the youngest of three children, preceded by Eugene, also a musician and a cook, and Marie, her older sister, civil servant, and her stalwart support. Although her parents separated, she had a loving relationship with both, spending time in Brooklyn with her father and on Long Island with her mother. She always knew she wanted to make something of herself and help her community.

At first, she was thwarted in this. She received a full scholarship to Plattsburgh College to study home economics. She learned this only years later, because her great-aunt Ada, jealous of Vera’s ambition, had intercepted and hidden the acceptance papers. Thinking she hadn’t been accepted, Vera enrolled in Alpha Business School in Brooklyn, and became a secretary, with the help of her sister.

She always joked that in any event, she was better with words and numbers than with pots, pans, and needles.

The Forties were busy years. She married Rufus B. Shorter in 1943, a graduate of Lincoln University, a sergeant in the Army who served in North Africa and Italy. She participated in Brooklyn community life, helping youth groups, organizing concerts, recruiting Black celebrities to contribute to these activities, and, of course, working with the NAACP and ASALH (Association for the Study of African American Life and History). She also continued her training by studying accounting at Pace College, and later at Queens College.

She and Rufus continued to move forward in their lives. They had two daughters, Lynn and Beth. Rufus worked as a teacher, then as an administrator at the N.Y. Board of Education, rising to the position of assistant superintendent of special education. Vera was hired as an auditor at the IRS, working her way up to office manager, group manager, and then equal employment opportunity officer. They were both the first African Americans to reach those positions.

Vera enjoyed communicating, and often contributed articles to Black publications — Black Odyssey, Our World, and others. When the family moved to Saint Albans, Queens, she joined with Henrietta and Ella Ferguson to create a local newspaper called the Community Chatter. She was also president of the neighborhood civic association and the PTA.
The Shorters began visiting Martha’s Vineyard regularly in the late Sixties, renting in the summers, and eventually buying a summer home. They moved to the Vineyard permanently when Rufus became the superintendent of schools on Martha’s Vineyard in 1976. He was instrumental in coordinating the efforts to build the PAC (the Performing Arts Center at the high school) and revitalizing the Nathan Mayhew Seminars, while Vera organized and participated in many fundraising events like celebrity tennis, increasing her participation after Rufus’ sudden death in 1980.

Vera was tireless in her community work, joining not only the NAACP, where for years she chaired the legal redress committee, and ASALH, but also serving as president of the Lagoon Pond Association, and on the affirmative action committee of the schools, and the boards of the Nathan Mayhew seminars and the M.V. Hospital. She received many awards, among them the M.V. NAACP’s Humanitarian Award in 1996, and in 2009, the NAACP New England Chapter’s Living Legend Award.

She loved to read, and participated in two book clubs. Of the many loving comments book club members have made, Trudy Russell said, “When I think of Vera, I think of great ladies. The combination of brains and the ability to make everyone feel as wise as she was is rare and wonderful.”

She also loved to entertain, and would tell all her friends that cocktail time was at 4 o’clock any day of the week. No holiday went uncelebrated, and since her birthday was near Christmastime, her house was opened to well-wishers. Her friends knew to expect a party the week after Christmas, and Vera would navigate through the crowd with a smile, a joke, and her natural warmth.

She is survived by her two daughters and her grandson. Lynn Shorter is a retired senior lecturer of the University of Central Lancashire in England, and a poet whose manuscript “Singer in the Gray of Jean-Michel” was winner of the 2020 Slate Roof Press Chapbook Award/Elyse Wolf Prize. Beth Shorter Bagot, a retired Alvin Ailey dancer and language teacher, lives in France. Vera’s grandson, Gabriel Bagot, with M.B.A. in pocket, is currently working in the hotel business. She was always particularly close to her late sister Marie’s children, her niece Sheila Davis, nephew Dr. Michael Dunham, late nephew Ronald Dunham, late niece Zoe Dunham, and their children and grandchildren.

As per Vera’s wishes, there will be no services, but a celebration of her life will occur at a future date. Friends wishing to make a donation in her name are invited to choose one of the following organizations: NAACP, ASALH, M.V. Hospital.