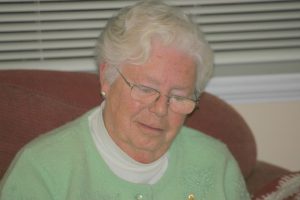 Priscilla was born on Nov. 25, 1939, in New London, Conn., the daughter of Walter K. and Ethel M. Hjelm. She had lived in Oak Bluffs since she began teaching at the Oak Bluffs School in 1965. She was an Island fixture, and an involved community member her entire life, and her passing is a loss to all who knew her.

Priscilla’s father, Walter, was a high school teacher and coach, and moved frequently when Priscilla was young. In her first years she lived throughout New England, including time in Connecticut, Vermont, and in Duxbury and West Springfield. She graduated third in her class from West Springfield High, where she was a member of the school band and a singing group.

Priscilla attended Bates College in Lewiston, Maine, from 1957 to 1961. There she made lifelong friends as part of the “Gangarootie Scorpions.” Those friends would have a reunion each year for many years, and would stay as friends through the remainder of their lives. She graduated from Bates with a B.A. in Liberal Arts.

While at school in Maine she began spending her summers on the island. She met Ralph Sylvia there, and the two were married in 1961.

Prior to becoming a full-time Oak Bluffs resident, Priscilla lived several years around New England while Ralph pursued a college professorship. She taught sixth grade students in Amherst for two years. Her son Carl was born in Oak Bluffs in 1962. She was busy trying to juggle young motherhood and new schoolteacher responsibilities. She moved back to the Vineyard in 1965, and began teaching fifth graders at Oak Bluffs School. She held that position until her retirement in 2000. Early in her career she earned a masters’ degree in education from Bridgewater College, and she continued professional development throughout her career. Her teaching career in Oak Bluffs, which lasted 35 years, saw generations of Oak Bluffs families, and she is uniformly and fondly remembered as a tough teacher and the best they ever had.

Priscilla became involved in the planning board in Oak Bluffs in 1978. This was the start of her involvement in local planning, land preservation, and town politics, which would last for 40 years. During her time on the planning board, the town was going through many changes, and she was an integral part of developing a vision for the community. She was a regular fixture at town meeting, where she sometimes spoke on issues that were important to her. In 1980 she joined the Friends of Oak Bluffs, and served as treasurer of that group for many years. That group is responsible for the benches, bricks, and lanterns all around town, and has contributed to the beauty and preservation of the town.

In 1984 Priscilla attended a meeting regarding the possibility of establishing a Land Bank for Martha’s Vineyard. This started a lifelong effort to establish, fund, and direct the Land Bank. She served as a Land Bank commissioner from 1986 until 2019, and worked side by side with commissioners, most notably Pam Goff and director James Langyel, to preserve, in perpetuity, thousands of acres of treasured Vineyard land. Her effort, and the effort of her fellow commissioners, has set aside land for residents, visitors, and wildlife. Future generations will reap the benefits of these efforts, and the essential character of the Island will be preserved in large part due to the time and direction Priscilla provided.

In addition to her public involvement, Priscilla was a passionate gardener, and was proud of her yard and the public gardens around Oak Bluffs. She was also a highly skilled seamstress, master at knitting, and avid birdwatcher. She made generations of children Raggedy Ann and Raggedy Andy dolls, and was continuously sewing for friends and family.

Priscilla was preceded in death by both her mother and father, and is survived by her sister Karen Hjelm of Columbus, Ohio, and her sister Louise (Alan) Davidson of Dublin, Ohio. Her sister Karen was with her through the last months of her life, and provided compassionate and complete care. Family and friends are all tremendously thankful for the time and care Karen took. Priscilla is also survived by her son Carl, who lives in Hailey, Idaho, with wife Kirsten, children Alexandra (Jim) Linn, Chase (Max) Dougherty. Priscilla is also survived by her grandson Griffen Harmon of Utah, and by multiple nieces and nephews, many grand-nieces and -nephews, and two great-granddaughters.

Care for Martha’s Vineyard, the town of Oak Bluffs, her hundreds of students, and her family, defined Priscilla’s life. She dedicated her passion, her formidable intelligence, her heart, and her time to care for all of these. Her passing is a loss to all who care about the Island, to all who learned from her, and, most of all, to the family and friends who shared her life.