That was quite a storm we had on Saturday. I’m not sure what the exact snowfall totals were for Aquinnah — it seemed to be about a foot and a half, judging from the shoveling we did. The wind was fierce — not as bad as the nor’easter in October — but it did create some huge drifts, and downed the power for nearly 24 hours. It seemed on Saturday morning that the power might stay on, but then at 12:15 pm, there was a “pop,” and all went dim and quiet. Luckily, we were prepared: We had homemade banana bread and downloaded episodes of “Cheer.” We settled in, then shoveled, then shoveled some more. We went out to investigate in the latter part of the afternoon, and promptly got the truck stuck at the end of our road (we were so close!). Thank you to Chris Manning, who happened to drive by and got us out.

After a chilly night sleeping in the living room close to the fire burning in the fireplace, we all woke up to lots of dazzling snow, but still no power. Then at 8:15 am, it came back. Is there any better sound than the buzz of returning electricity? I don’t think so. I could’ve listened to the hum of the refrigerator all day. On Sunday afternoon, there was a lot of sledding to be had. After scoping and trying out different hills around the Island, we landed at a large hill in Chilmark where a few other families had the same idea, and the kids sledded and sledded until it was getting dark, and they were covered in snow, and it was down their backs and in their boots. I think nearly every child on the Island went to bed on Sunday night pleasantly exhausted from sledding, fort building, and snowball fighting. The rest of us collapsed on our sore backs and shoulders, which were the result of lots of shoveling.

Show of hands: Who at the beginning of football season called a Super Bowl between the Rams and the Bengals? Anyone?

The Gay Head Community Baptist Church held its sermon on Sunday via Zoom; it should be back in the church live this week, barring any other weather mishaps.

On Monday, the Aquinnah town offices announced that due to a frozen pipe and no heat, they would be closed all day, and remain closed until further notice.

The Aquinnah Community Emergency Response Team (CERT) is looking for volunteers who are interested in working at the Town Hall Shelter or the Wampanoag Tribe Overnight Shelter. These are shelters that are opened when the town loses power for an extended period, or in case of another emergency. Training will be provided in the following areas: greeters, kitchen service, health services, communications, and childcare assistance. There will be a meeting at Town Hall on Saturday, Feb. 19, for potential volunteers, at 1 pm. For more information, contact Gabriella Camilleri at 508-645-2304 or aquinnahcert@gmail.com. If there is one thing these storms have taught us, it’s that these services are greatly needed, and go a long way in providing heat, electricity, and company for those riding out the storm with no power — please consider volunteering.

The next sessions of Pathways’ biweekly senior discussion group, “Gray Matters,” led by Genevieve H. Abbot, will be on Friday, Feb. 11 and 25, from 10 to 11 am via Zoom. This is a group for people 65 years and up. You can contact Ms. Abbot with any questions at mvgengen@gmail.com. The Zoom link can be found at pathwaysmv.org. Pathways is also hosting its Tuesday night Writers’ and Poets’ group from 7 to 9 pm. There is limited in-person space, and you can also attend virtually; go to the website to register. Pathways is currently displaying the artwork of Wendy Weldon and Rob Hauck, two artists who are always worth checking out.

Storms make me grateful for the community I live in. When we still had power on Saturday morning, I got a call from Juli Vanderhoop. There was a section of State Road that didn’t have power, and she was checking on us to make sure we were OK. She then checked on the “elders” of the town to see what they needed. She also gave out a lot of wood, so people could have some fuel to burn. We didn’t make it there, but I know the warming shelter was up at Town Hall, and the Emergency Shelter at the tribe as well. I am always anxious during a storm when we lose power, but I am not afraid, because I know that there are neighbors and professionals who will help me if I need it. Thank you to the workers of Eversource who worked through the night to get our power back, and to David who plows our road, and to all the other workers and volunteers who helped to keep everyone safe. 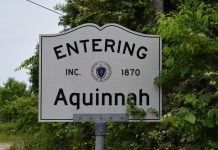