Bruce Anthony Cordray (“Tony), 65, of West Tisbury passed away on Saturday, May 7, 2022, at Massachusetts General Hospital after a short illness. He was the beloved husband of Katherine (Byrne) Cordray, to whom he had been married 29 years, and loving father of James (“Max”) Cordray. 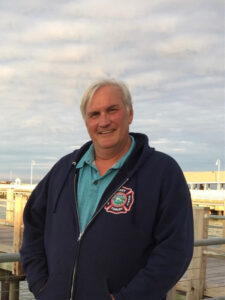 Tony was a beloved member of the community on Martha’s Vineyard, where he had lived for more than 45 years, volunteered for the West Tisbury Fire Department, and served as the animal control officer for the town of West Tisbury.

Born on Oct. 1, 1956, in Columbus, Ohio, Tony was the son of William Daniel (“Lyn”) Cordray of Delaware, Ohio, and Sally (Jenkins) Pujol of Georgetown, Calif.

Tony was a skilled master carpenter, whose career spanned from early days shingling houses to overseeing extensive renovation projects all over Martha’s Vineyard.

He was a volunteer for the West Tisbury Fire Department for 19 years. He served as lieutenant for the department, and as president of the West Tisbury Firemen’s Civic Association. He loved the time he spent with his fellow firefighters, from radio call Sunday to serving side by side at calls.

Tony loved working in his garden, keeping chickens, and spending time with his family, friends, and his dog, Geoffrey. He put many miles on his Harley Davidson, riding to Milwaukee twice, and all over New England. He was a helpful and generous friend and neighbor. He will be sorely missed by everyone who knew him.

Tony also leaves his sisters, Danielle and her husband Michael Boudreault of Worthington, Ohio, Raquelle Vernon of Auburn, Calif., and Rene Pena and her husband Dan of Auburn, and Angela Genereux of Boca Raton, Fla.; his in-laws Donna and her husband Frank Whitehead of Plainville, Lynda and her husband Rick Hinkson of Norwood, and Mary Byrne and Mark Hinderlie of Charlestown; and his nieces and nephews, Adilee, Ella, Koen, Victoria, Elizabeth, Anna, Alexander, Emily, Michael, Branden Ashley, Kyle, Casey, Kaela, Kayla, and Christopher. He was predeceased by his sister, Alexandra Cordray.

A memorial service will be held on Sept. 18 at the West Tisbury Agricultural Hall, from 2 to 4 pm.

In lieu of flowers, donations may be made in Tony’s name to West Tisbury Firemen’s Civic Association Scholarship Fund.