The World Market Holiday Shop has transformed the old Capawock movie theater in Vineyard Haven into a wonderland of sparkling color and light. The dark theater is a magical environment teeming with an endless treasure trove of special products made by artisans in six global women’s empowerment projects coming out of Haiti, India, Palestine, Peru, Tanzania, and Zambia.

As you stroll down and back through the displays in each row, enticing items catch your eye on your right and left. The range of choices with a plethora of colors, designs, textures lure you from one aisle to the next as you slowly descend toward the stage where there are yet more products to see.

The six initiatives began selling at the Capawock first in 2018. Over the summer since 2017, they come together to sell on the porch of the Grange as a means of informing folks here about their global empowerment initiatives and showcase the culturally rich arts and crafts being produced by the talented artisans whom they work with around the world. The enterprises include African Artists Community Development Project by Marsha Winsryg, Olive Branch Fair Trade by Linda Cohen, Maasai Partners by Judy Lane, Ama Nomad by Kati Johnsen, Invisible World by Dawn Moran, and Empowered Haiti by Carolyn Stoeber. Although the ventures are diverse, they share a common belief that economic stability is a force that creates change in the lives of women and their families.

The group grew out of Winsryg’s initial efforts. She explains, “I had been selling crafts since 2006 to raise money for families with kids with disabilities in Zambia. In 2007, I rented the Grange porch in the summer and did well.” A few years later she met Jeanne Staples, founder of PeaceQuilts, and they talked about ways to work together. The pair decided to alternate weeks at the Grange. The year after that they decided to do it together. “But I wanted to get other people involved who were doing the kind of work we were doing — women’s empowerment in different parts of the world for women who don’t have any economic possibilities to make a living or send their kids to school,” Winsryg says. The group grew as she met folks who, as she says, “were doing really inspiring work and impressed me. I thought it would be a lot more fun for us to sell together on the porch of the Grange in the summers.”

Then a few years ago they decided to find a place for the holiday season. The available shops were too tiny to squeeze all the goods into, so the Capawock has been a boon. That first year they weren’t sure how it was going to work in terms of the setup in the unique space. “To me, it looks like an impossibly crazy place to do what we wanted to accomplish,” Winsryg says.

One of the members had friends who volunteered to do the basic underpinnings. “They were inspired,” Winsryg says. “They came in with very lacy tree branches and put lights in them. They set 4-foot by 8-foot planks on top of the seats to make tables. We put tablecloths and vases with tiny lights in them on top. We had to try to get light in any way we could. I don’t know how many days it took them to do it the first time, but we were amazed at what they had done. They transformed it completely.

“It’s been an attraction. We keep the doors open and if you walk by and just glance in…you can’t keep going because you think, ‘What’s going on in here?’”

Walk down Main Street in Vineyard Haven and see for yourself. It’s a win-win — a chance to shop the world while supporting global women’s empowerment projects.

World Market Holiday Shop, sponsored by Vineyard Grocer, is open daily from 10 am to 6 pm through Dec. 24 at the Capawock Theater on Main Street in Vineyard Haven. See worldmarketmondays.org/who-we-are.html for more information. 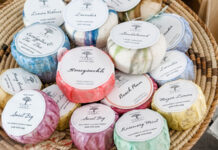 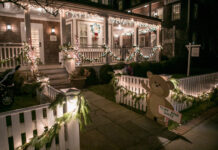 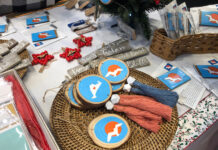