Well, we almost had it. A perfect three-day Memorial Day weekend that is, until of all things, smoke from wildfires in Canada sent smoky haze over the Island on Monday. But we managed to still enjoy the sunny weather, welcome many tourists, and observe the Memorial Day parade.While shopping the other day, I met the “Queen of Avon,” Grace Frye. I want you to know that she is still as beautiful and happy as ever. It was so good to see her and talk to her for a bit.Last summer John Swan Sr. died after a two-year battle with cancer. Shortly after John died, his widow, Pam, was diagnosed with breast cancer from which she has been recovering. This spring Pam and her children — John Jr., Julian, and Jackie — brought some hydrangeas and other plants to place on John’s grave. When they went to plant them last week, the plants had disappeared from the graveyard. The only word that I can come up with that fits this ignorant act and the people responsible for it is “disgusting.”Barrier beaches are essentially strips of sand with water on both sides. Join naturalist Dick Johnson for a walking tour of Eastville Point Beach to learn about these dynamic environments. Johnson has 20 years experience working on Martha’s Vineyard, and barrier beaches are his favorite habitat. He is a member of the Eastville Point Beach Committee which is working to prepare and implement a comprehensive restoration and management plan for this small public beach close to the towns of Oak Bluffs and Vineyard Haven. Call for registration and car pool info, 508-693-9426.Maddie Alley and her friend Ella Jernigan want to get the word out that they were the first to jump off the new Second Bridge on Beach Road shortly after it opened. Island residents will have the opportunity to enjoy a beloved children’s fantasy when the Martha’s Vineyard School of Ballet presents “I Do Believe In Fairies, Journey To Never Never Land” at the MVRHS Performing Arts Center tomorrow Friday, June 4, at 6:30 pm. Tickets may be purchased at the door for $10. Performers from Oak Bluffs are Jocelyn Baliunas, Rebecca Mandelli, Ava McGee, and Elizabeth O’Brien.Sunday’s Hospice Memorial Day 5K Race had the biggest turnout in its history. The view from the Wesley Hotel porch was magnificent. The harbor was crowded with boats and the sidewalks were crowded with sightseers and onlookers. Grandson Jeremy Alley-Tarter came in 5th overall.The entire Oak Bluffs School staff and student body took part in a Memorial Day observance with an all-school assembly in the gym on Friday afternoon. Students performed songs, recited poems, and read passages reflecting our country’s respect and homage to our brave veterans. Several local veterans were on hand, including staff members Rae Carter and Brian Weiland, as well as special guests, courtesy of the Oak Bluffs VFW and American Legion, Mev Good (US Army), Jim Dorsey (US Army), and Gene DeFelice, retired Capt. US Marines. Jim Dorsey and Mev Good spoke on their experiences in the armed services.Dates to remember at the school are the June 4 string concert and on June 6 to June 11, the 8th Grade Philly Trip.Big Times in May for the Labell family. Wally Labell celebrated his 60th birthday on May 26 and he and Linda celebrated their 35th Wedding Anniversary on May 24.They had a bash at Nancy’s on Saturday the 22nd with approximately 120 family and friends. Son Jeff was the deejay and it was a terrific time.We send birthday smiles to Jamie Reilly on June 1, my sister Ann Hearn on June 5, Hilda Mitchell the next day, Rory Moreis on June 7, followed by Bob Murphy the next day, Ernestine Kinnecom on the 9th, and Suzanne Walker, Lisa Williston, and Donald Bendavid all celebrate on the 10th. Anniversary wishes to Willy and Susan deBettencourt on the 10th.Enjoy your week.Peace. 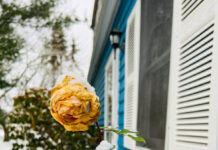