The goal is to encourage drivers traveling up-Island, who plan to turn left onto Old County Road across the oncoming traffic bound down-Island, to slow and do so safely.

During a visit to the site by state Department of Transportation (DOT) representatives, Island officials demonstrated that by placing cones along State Road, drivers planning to make a left turn onto Old County slowed and behaved more deliberately. A request to the DOT for installing delineators was rejected by DOT in June, but the demonstration may have led to reconsideration.

This story, in an expanded version, and a related story describing the DOT audit may be found at mvtimes.com. 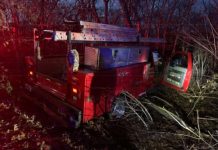