Le Grenier (French for “the attic”) sits perched above Martha’s Vineyard Bagel at the end of Main Street in Vineyard Haven. Jean Dupon is the restaurant’s chef and owner and has been for the past 33 years, making Le Grenier the Vineyard’s oldest chef-owned and operated restaurant.

Jean Dupon started cooking as a teenager in his native Lyon, France. His grandmother owned a restaurant in a train station, where Mr. Dupon honed his culinary skills.

After moving to the United States at 16 he worked at a number of Boston-area restaurants, including the Copley Square Sheraton, and eventually opened his own establishment, Fromages Import, a small cheese and gourmet foods shop in Harvard Square. Mr. Dupon’s next venture was opening Le Bellecour, a restaurant in Lexington. After a “wonderful” eight-month cross-country trip in a newly purchased camper, Mr. Dupon came to Martha’s Vineyard to open Le Grenier.

A narrow brick pathway leads you to the front door of Le Grenier and up the carpeted steps to the large dining room. Here, you are likely to be greeted by Mr. Dupon’s daughter-in-law, Michelle, and ushered to any one of the room’s cozy tables.

In the kitchen, you will find Mr. Dupon preparing one of his signature sauces, or (in the summer) his son Jean-Marc, or maybe his grandson, Zachary, who is 15 years old and capable of the entire menu. Granddaughter Jessica might be found bussing or waiting tables, and Mr. Dupon expects that Isabelle, another granddaughter, will join the family business just as soon as she’s old enough.

The family-feel and gracious hospitality certainly captivated one couple who dined at Le Grenier on their first date, again when they were engaged, next for their rehearsal dinner, and every year since to mark 28 wedding anniversaries so far.

The low ceiling (remember Le Grenier means “the attic”) lends a cozy bistro feel and allows guests to leave their mark with wine corks stuck randomly on the walls and ceiling throughout the dining room. Oftentimes, guests adorn these corks with messages commemorating their visit, “Happy Birthday,” “Engaged!” and so on and then seek them out on future visits.

While you familiarize yourself with the extensive menu, 9 appetizers ($14 to $19) and 28 entrées ($28 to $39) plus nightly specials, nibble on your choice of warm garlic bread or French baguette. The classic Escargots Bourguignon, snails in garlic-butter, makes for a delicious (and very French) starter. Other appetizers include clams casino, oysters Rockefeller, and on the lighter side, smoked trout with a small salad and lemon horseradish sauce.

For the main course, Scallops a la Russe: fresh scallops with shallots, red caviar, vodka, and cream; or Rack of Lamb with rosemary-currant sauce; Chicken Dijonnais: chicken with mushrooms, Dijon mustard and cream; or perhaps Vegetarian Wellington: broccoli, cauliflower, and carrot pate in a puff pastry.

For the adventurous eater, does Calf’s Brain Grenobloise suit your fancy? Organ meat is high in vitamin B-12 and a good source of iron, potassium, and protein. At Le Grenier, calf’s brain is served with a brown butter, lemon, and capers, a sauce native to Grenoble.

For the grand finale, there’s coffee, tea, espresso, and cappuccino, to go with a number of desserts, including Crème Brulee, Frozen Key Lime Soufflé, and Profiteroles (pastry balls) served with vanilla ice cream and choice of chocolate or caramel sauce.

Le Grenier is open for dinner at 5:30 pm Monday through Saturday and now serves wine. At least until March, every night is two for one entrée night, as long as you bring your coupon that appears in the Martha’s Vineyard Times, somewhere near this article. Restrictions apply.

Chef Dupon and his team are available for private functions including birthdays and weddings. Call for reservations, 508-693-4906. 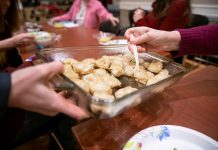 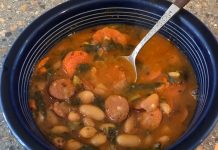