The pigs, cows, goats, horses, ducks, chickens, geese, and rabbits have all returned to their respective pens, coops, fields, and cages. The artwork has been collected and baked goods have been eaten. The rides have been folded up and loaded on to the ferry for others to enjoy at another venue. The firemen will likely not cook a burger again until next year, but you might find Local Smoke at a backyard party.

Our children have all had long hot showers after four days of running wild at the fair. Children representing the Ambulos, Keene, Parker, Green, Glasgow, Taylor, Larsen, Loveluck, Keefe, Nixon, Dunk, Karlinsky, O’Connor, Thorpe, and Hickey families are but some I spotted with blackened feet. The filthier the feet, the better time at the Fair. The last night of the Fair marks the first night of easing back the bedtime in preparation for school. Some see school as a chore, but many see it as an opportunity to reconnect with long-lost friends. I see it as an opportunity to regain something that vaguely resembles a normal schedule.

Julie Coleman is ready to slip her feet into some sturdy walking shoes and hit the trails for the first, long-awaited women’s walking group of 2011. The basics are Friday, August 26, at 9:15 am at Great Rock Bight. For details, call Julie at 508-645-2261. Julie and Bill were lucky enough to have a visit from daughter Chandra, four-year-old grandson Lucas, Chandra’s boyfriend Lawrence, and their 13-month-old daughter Ella. Their visit was a grand way to mark the Coleman’s 30th summer on the Vineyard.

Gabriela Herman has been busy photographing summer life at Beetlebung Farm. She will have a one-night only pop up photo exhibit on August 27 at the Farm. From 4 to 7 pm, stop by and check out her series of images shot around the farm, titled Beetlebung Food Diaries.

Thanks to Phyllis Conway for sharing the following information: The Boston String Quartet will perform at 7 pm on Sunday, August 28, at the Chilmark Church. It sounds like a lively way to wrap up the last weekend in August.

Matt Taylor, son of Connie and Bob, will share a multimedia presentation about his new book, “Jaws: Memories from Martha’s Vineyard.” Get yourself over to the library Wednesday, August 31, at 5:30 pm. Rumor has it Susan Murphy will be in attendance to give Matt a hand. Susan and Lynn certainly played an integral role in the creation of the movie 30-plus years ago.

Bob Rosenbaum will be showing his photography work at the Sovereign Bank in Beetlebung Corner in Chilmark. This year he will feature the photographs he took while in the Maldives this past March. It was the best scuba diving he has done in his 40 years of diving. There were plenty of fish per cubic foot, incredible colors, dozens of beautiful manta rays, and one huge whale shark. He spent nine days on a boat traveling around the country doing three dives per day. The only sad note is that all this beauty is in jeopardy due to rising ocean temperature and levels. The highest elevation in the country is a mere seven feet above sea level. Bob’s opening will be from 4 to 6 pm on Friday, September 2.

Michael Reinitz will mark his 75th birthday with a celebration surrounded by friends and family who travelled from coast to coast in his honor. This long-time Lucy Vincent regular will be honored by both the Iantosca and Kerrissey families, to name a few.

The Iantosca family is gathering for a big reunion. Paul and Ruby’s son Justin is flying in from Luxembourg. After smoking beef brisket, a seven-year strong tradition that the Iantosca family has come to count on, we hope Justin will circle through the Texaco and check in with the old crew. We are sure to see Paul and grandson, Jaden, for some squid fishing and crab catching along the dock.

I have Flanders Field news from my sports commentator Bill Edison. Ed Eger the homerun terror was back with a vengeance last Saturday. He modestly acknowledged his grand slam home run over Pasture Road and into the Green Monster (aka Poison Ivy patch) by sharing that he eats a lot of lobster rolls and uses a light bat. 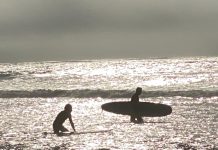 Chilmark: Serendipity at every turn 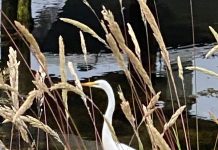 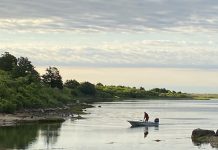