Each spring the students in the 4/5 class have a fundraising event to offset the costs of their September week at school aboard the Alabama. Something new and appealing to all happened this year. No, it wasn’t the typical raffle, it was a Chilmark Chocolates scrumptious sell-off. Many thanks to MaryBeth Grady and Allison Berger for their generous contribution to our kids. For those of you who ordered, pick-up/delivery is tomorrow.

Judy and Ted Mayhew have returned from a trip to Hitchin in Hertfordshire, England, to visit Judy’s sister and husband, Roger and Kucki Spicer, and niece and nephew, Sophie and Jamie. Judy is now a proud great aunt to Jamie’s twins. Niece Sophie is graduating from the University of Brighton. Roger and Kucki took them on day trips to Churchill’s family home at Blenheim Castle and his gravesite. They also visited Bletchley Park which is where they deciphered the German enigma machine during World War 11. Additionally, they went to the Imperial War Museum in London and took a road trip to Aldeburgh in Suffolk taking in the sights, sounds, and smells the wonderful coastal towns had to offer. The rain stopped after six weeks the day they arrived and it began raining again the day they left. I’d say their timing was spot-on.

Sadly, Phyllis Conway died May 29. She was an active member in the community, and I am sure you have all come across her and her devoted husband, Bob, at the Flea Market or at Church. Bob plans to have a Memorial Service for her in July, so that all may enjoy the new organ music in the Church. She was very fond of it’s melodious sound.

The Chilmark Preschool is, once again, in fundraising mode. They have come up short of funds for the bathroom addition. Not only have they sent out a letter asking for donations towards the nearly $10,000 they are short, but each family is selling raffle tickets. Tickets can be purchased through any preschool family. Don’t know any preschoolers? Email Rebekah Thomson rebekahjthomson@gmail.com or call Heather Lionette at the preschool to purchase tickets. The lucky winners will receive a gift certificate to one of many Island restaurants. Everyone needs to eat, right?

Arlan Wise has returned from a week in New Orleans where she attended the United Astrology Congress, which is held every four years. Fifteen hundred astrologers from all over the world came together to meet, teach, exchange information, and have a good time being together. Arlan gave a lecture on the Astrology of Internet Dating. She is Vice President of the Organization for Professional Astrology and was quite busy manning their table in the trade show and hosting their evening parties. She also got out of the hotel at times to see some of the interesting city of New Orleans.

Next Wednesday, June 13, wildlife biologists Luanne Johnson and Liz Baldwin will give a talk about beach and cliff nesting bird surveys on the Vineyard. It’s free at 5:30 pm at the library.

Betsy Burmeister reminds us that the Windemere Annual Auction will be held at the Ag Hall on June 15 from 6 to 8 pm. Admission is free along with a spread of desserts, drinks, and some light fare. The live and silent auctions along with a raffle are sure to catch your attention and send you home with gift certificates for golf, fishing, dinners. Maybe you’ll be lucky enough to grab that week stay in a Maine cottage.

The annual Blessing of the Fleet will take place on June 17 from 9 to 10 am on the waterside of Menemsha Texaco. Reverend Arlen Bodge will preside.

Tuesday pizza nights at the Chilmark Church wrapped up this past Tuesday with a spaghetti dinner extravaganza coordinated by Tom Ruimerman. Pizza nights are on the back burner until fall to make way for lobster rolls starting on June 19.

I spotted Johnny, Millie, Lily, Alex, Michelle, and Jonathan Krausche at the library on Saturday. Little Johnny is up and walking and all the kiddos are much bigger than when we saw them last fall. Also spotted at the Library was Olivia Larsen. The recent Lasell College graduate will be manning the desk this summer. It was so nice to see her happy face. 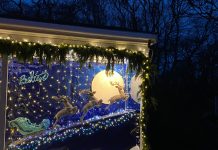 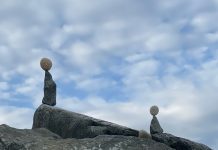 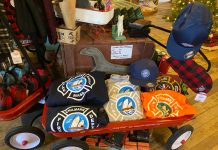 Chilmark: Do you have a Chilmark Chocolates story to share?