The Martha’s Vineyard boys varsity hockey team scored first but gave up five unanswered goals in a 5-1 loss to Bishop Feehan Saturday night at the M.V. Arena.The Vineyarders are being tested. They have come up against a dose of the proverbial adversity that good teams must face and conquer to become great ones.After a 10-2 start to the season, the Vineyarders (10-4-1, 3-3-1 EAC) are 0-2-1 in their past three games, all against Eastern Athletic Conference opposition. They have been outscored 16-7 in that span, including a 7-2 pasting from Coyle Cassidy on January 26 and a disappointing 4-4 tie with Bishop Stang on January 30.Against the Shamrocks Saturday night, a team M.V. blanked, 2-0, on January 16, the Vineyarders came up against a hot goaltender in Colin Barkan, made too many mistakes in the defensive zone, and gave up two power play goals.

Twice, on Feehan goals one and three, several skaters in green jerseys were allowed to camp in the crease in front of Vineyard goalie Wyatt Jenkinson and bang away at the puck until it went in. The Shamrocks scored goals two, four, and five on high wristers into the top corner. All told, the Vineyarders outshot Bishop Feehan 25-20.

The game started well enough for the hosts. Shay Hill scored the first goal of the game at 4:12 of the first period, assisted by Huck Burke and Andrew Wiley. Hill chipped the puck in from the left post after the Vineyarders stormed the Feehan cage. After that, it was all downhill.

Ryan Wagner and Chris Magrath answered for the Shamrocks with two goals in two minutes, at 9:46 and 11:46. From there, Feehan locked down the Vineyarders with airtight defense and stayed in front for good.

The Bishop Stang Spartans twice battled from behind to earn a 4-4 tie with Martha’s Vineyard on January 30. Vineyard goals were scored by Emerson Mahoney (2), Sam Burke, and Brian Fraser.

The Vineyarders will try to regroup with games Wednesday, Feb. 6, at Driscoll Arena in Fall River against Somerset Berkley and Saturday, Feb. 9, at home (4:10 pm) versus Nantucket. 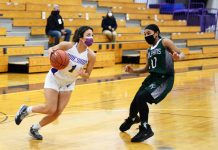