The man with the crisp white apron working his magic in the kitchen was Chris Fischer. Opening weekend at the Beach Plum Inn Restaurant was a full house of friends, family, and fans. Almost 200 diners were dazzled by the revamped dining room overlooking a breathtaking Menemsha sunset. Chris and longtime Beach Plum handyman and jack of all trades Jonias Assis transformed the space into a most welcoming, edgy, rustic, and comfortable space. Barn board tables adorned with mason jars, sweet flowers, and tea lights set the backdrop for the fresh-from-the-farm dinner. Chris isn’t the only one in the kitchen, of course. He is supported by pastry chef Olivia Pattison who hit the ball out of the park with her chocolate tart and banana cream pie. Emma Young took on the role of seamstress, letterpress artist, Beetlebung Farm harvester, logo creator and flower arranger. Danielle Pattavina, who grew up on the Cape and met Chris in New York, is managing the front of the house, no small task on opening night. Ryan Hart trekked up from the Big Apple to help with the lift-off. Lee Desrosiers, who worked with Chris at Diner in Brooklyn, will be the righthand man. The waitstaff, including the familiar faces of Dana Nunes and Alysse Fischer, made me feel like I was in their home — a most comforting feeling. What is the big problem I foresee happening at the Beach Plum this season? Their diners are not going to want to leave.

Have you had a long day and don’t feel like making dinner? Tonight is your lucky night. It’s Dine to Donate at Sharky’s to benefit the Chilmark School PTO and the Chilmark Preschool. Eat in or out at either Sharky’s and a portion of the proceeds benefit our kids. It’s a no-brainer.

Finnegan MacLeod celebrated his sixth birthday surrounded by his buddies and family at Felix Neck. They checked out antlers and bones and topped it off with Kai Cake— that is, shaped like the character Kai from Lego Ninjago. Kai is the Red Ninja of Fire whose favorite weapon is the sword of fire. Needless to say, mom Hope used a substantial amount of red food coloring to get just the right shade of vibrant, fiery red. Sister Lindon, cousin Emily Boyd, and buddy Quinlan Slavin and a bunch of others rounded out the kid posse.

Chilmark School principal Susan Stevens is seeking a volunteer to speak to the students on May 24, the Friday prior to Memorial Day, about what Memorial Day is. For as long as I can remember, the students have made their way to Menemsha, visited with the Coast Guard and thrown flowers in the water as a symbol of heart-felt wishes of peace and a sign of respect for those we have lost. If anyone is willing to join the children and share their story please contact Susan at 508-645-2562.

Tim Carroll, after returning with Genc Brinja from a quick trip to New York City, was presented with primo cookout weather to celebrate his birthday. The grill was out, the deck was filled with friends and family, cake was served. An all around great way to end the weekend.

Hey folks, a quick reminder to all of you whose hearts are pumping getting ready for a busy summer season, the free town nurse blood pressure clinic is next Wednesday, May 15, at the library from 12:30 to 1:30 pm. Appointment time is also available at the town nurse’s clinic the same day at the town hall from 2 to 3:30. Give our dedicated town nurse Laura Murphy a call at 508-687-7132 for details.

“Women of Martha’s Vineyard” is Tom Dresser’s new book of biographies of prominent women who have made significant contributions to the island community. From Chilmark Tom selected the Adams sisters, Lucy and Sarah, who performed with Barnum and Bailey Circus as well as running a tea room on State Road in Chilmark. His book covers their Vineyard lives as well as their national status. Tom will have a book signing at Edgartown Books at 11 am on Saturday, May 11.

Pierre Bourque has some of his recent works on display at the Chilmark Library this lovely month of May. Stop in and take a look around. I did.

Congratulations to Stephanie Bouchard who was recently engaged to Nathan Neipris. He was pretty sneaky and managed to get family and friends to surround them with excitement after he popped the question. Yippee for all. 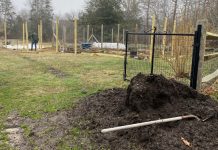 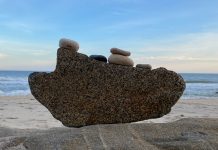 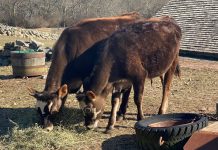