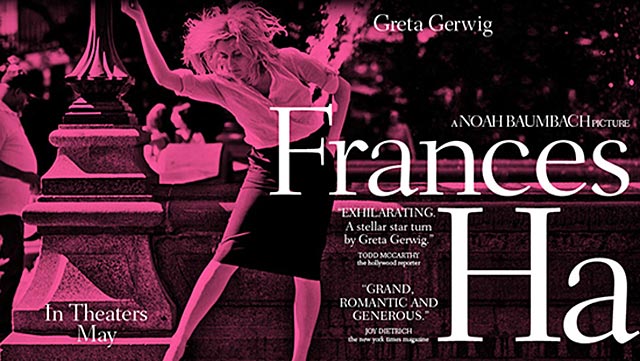 The free-spirited subject of Noah Baumbach’s latest movie, “Frances Ha,” has happily settled halfway into adulthood when life starts throwing her curve balls. This 20-something comedy plays this Thursday, June 13, at the Martha’s Vineyard Film Center.

Now in his 40s, Mr. Baumbach has mastered the art of telling stories about young adults suffering identity crises. This time he pairs up with actress Greta Gerwig, who plays the dance apprentice Frances, to write a particularly charming version of the passage into adulthood, and as director, he has set the film in handsome black and white.

At the start of the film, Frances lives in a New York apartment with her best friend, Sophie, played by Sting’s daughter, Mickey Sumner. On Frances’s side at least, Sophie is more than your average best friend. She’s Frances’s favorite person in the world and her lifeline. The two still play-fight, hang out together, or curl up cozily at night to share confidences. Given to spontaneous bouts of skipping and dancing along urban sidewalks, Frances has lived a pretty carefree life so far. That changes when Sophie decides to move out — and on.

Once Sophie departs, Frances hits a rough patch, and the audience watches as she struggles to keep her balance. Danger signals start blinking everywhere. Given to impulsive decision-making, Frances dumps a boyfriend, moves in with two guys, rejects a job at the dance studio where she has been apprenticing, and spends her tax windfall on a weekend in Paris. Even for a privileged, middle-class person like Frances, life turns out to be challenging.

What pushes “Frances Ha” beyond run-of-the-mill moviemaking about the passage into maturity are Frances’s vitality and resilience. Even while making mistake after mistake, she rolls with the punches. Another plus is dialogue that sounds both eye-opening and natural. “I just got out of relationship jail,” Frances says early on of the break-up with her boyfriend. “You seem older but less grown-up [than Sophie],” says one of her post-Sophie male roommates.

Even for those in the audience who have left 20-something angst far behind, the accomplished filmmaking of “Frances Ma” makes it a pleasure to watch. Frances is a keeper.