“The fox has many tricks,” goes the saying. “The hedgehog has only one — but it’s a good one.” And so it is in nature: some species thrive by being flexible, while others evolve to be perfectly adapted to a very specific niche.

Consider, for example, the bog copper butterfly. Of all the Vineyard butterflies, this is the one most closely tied to a particular setting: sphagnum bogs rich in wild cranberry. You won’t find this tiny, delicate insect on the Vineyard outside a bog, and its life cycle is intimately tied to both that habitat and the wild cranberry that is the only plant the butterfly’s caterpillars will eat.

The bog copper, with a geographical range encompassing the northeastern United States and much of eastern Canada, is a close relative of the American copper, a versatile butterfly which you likely have in your yard. But somewhere along the evolutionary road, the bog copper opted for hyper-specialization, a life cycle centered on the challenging but predictable conditions of a bog.

Perhaps the biggest challenge a bog-dwelling insect faces comes from changing water levels. With limited mobility or none at all, the eggs and caterpillars of the bog copper need to be able to survive by exposure to air and prolonged submersion. Indeed, bog coppers are so well adapted to a wet environment that drying out is the real risk they face. A detailed study by entomologist David Wright, published in 1983, describes the fascinating adaptations of this butterfly.

Female bog coppers lay their eggs in late spring, one at a time, near the base of wild cranberry plants. In dry times, dew or any rain that falls beads up on the cranberry’s waxy leaves and is funneled down the stem to wet the butterfly eggs. And when water levels rise with fall or spring rains, the egg turns out to have a layer of air under its outer skin, allowing the egg to develop even under water.

The caterpillar begins its development inside the protective envelope of the egg, and then goes nearly dormant through the summer, fall, and winter, hidden from predators and buffered by the egg from changes in moisture. Come early spring, the caterpillar leaves its egg, begins feeding on cranberry leaves, and starts to mature. Again, it’s adapted to submersion: a tight layer of hairs on its body traps a layer of air that allows the exchange of gasses (specifically dissolved oxygen) from the water to the caterpillar’s tissues.

When mature, the caterpillar briefly pupates to change into an adult. Even here, the butterfly has a special talent: the pupa is equipped with a rasp-like structure that can make noise when the pupa twitches. It’s a tenuous last line of defense, but the noise might deter ants or other predators that attack the pupa.

Emergence of the mature butterflies is closely timed to the flowering period of the wild cranberry, tracking that bloom period through its year-to-year variation. The adult butterflies take nectar mainly from cranberry blossoms, and are likely an important pollinator of the cranberry plant. From time to time, adult bog coppers engage in brief, swirling mating flights or territorial disputes. But mostly, they sit — on cranberry plants, naturally — waiting for a member of the opposite sex to pass by.

Bog coppers are weak flyers with little inclination to leave their bog and their cranberry plants. I’ve never found this species outside a bog, and unless two bogs are very close together, there is little or no intermingling of the bog coppers that reside there. Ordinarily, you’d expect that inbreeding would weaken the gene pool of each of these little populations, resulting in its eventual extinction. But this butterfly is so well adapted that inbreeding actually strengthens its survival: the unique adaptations for survival in a particular bog are reliably passed down to the next generation, with little variation.

Bogs suitable for this butterfly are not numerous on the Vineyard. Small bogs can’t support enough butterflies for the population to persist for very long — though they may serve as “stepping stones,” helping the odd individual make it from one large bog to another nearby, if there is one. And commercially worked bogs usually don’t support the butterfly because of insecticide use or simply the physical disturbance of working the bog — a form of disruption evolution didn’t anticipate. But of the large and cranberry-rich bogs that we do have, a high percentage seem to support bog coppers. In some cases, the butterfly populations in those bogs may have been isolated from immigration for decades, even centuries.

The risk the bog copper takes, of course, is that conditions in its bogs will change, or that bogs will be destroyed. If the population in a bog winks out, recolonization of that bog depends on the rare arrival of a wanderer from another bog. And if no suitable bog is nearby, recolonization approaches impossibility. For now, several large bogs and bog complexes on the Vineyard support good numbers of this unique butterfly. But the bog copper’s survival here depends on keeping those bogs in a healthy, natural condition.

A culture of cheese at Grey Barn 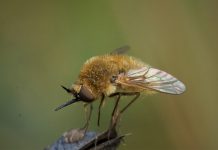