Are you mad about it? Are you not going to take this anymore? Put your art where your mouth is. Featherstone invites you to “Protest”; vent your feelings through your art. The art will be displayed from March 12 to 29. The opening reception is free on Sunday, March 12, from 4 to 6. What was it you wanted to say? Show us with your art.

The Vision Council of the planning board finally meets this evening, Feb. 23, at 7 pm at the Tisbury Senior Center, and you are invited. Specialists in traffic engineering will help us plan improvements to Tisbury streets under the state-funded program to make roadways safer, more accessible and healthier for all users: cars, bikes, and pedestrians. This meeting is a workshop to identify priority projects that qualify for MassDOT funding.

Did you take advantage of the beautiful weather over the holiday weekend? It was almost spring, with sunshine and warmer air. There were crowds at Menemsha and Gay Head, with at least some folks happy that they had sent in their income tax forms. Guess I better get started.

Congratulations and sustained applause to our very talented high school performers and those behind the scenes. All report that “Guys and Dolls” was a wonderful success. The only complaint that I heard was that there was no performance on Sunday evening. Many said that they would have liked to go back again.

I hope the snowstorms are over for this year. We do start daylight-saving time in just another 10 days.

We surprised the folks at Dish Network when we called because our satellite dish blew off its platform in the high winds. I guess many others had issues, because we were told it would be two weeks until someone will come to fix it. I really don’t miss TV now — all the news is repeating the political stuff I don’t want to hear. I am sorry to miss a couple of episodes of “Victoria” but I can catch up with those on my computer.

When my mother was a child in England, they often served pancakes for supper on Fat Tuesday or Mardi Gras, the last Tuesday before Lent. Unfortunately, she did not often make pancakes at all. She did share something the children her age used to chant at this time of year. They sang, “Pancake Day is a very happy day; if we don’t have pancakes, we’ll all run away.” I rather liked the sound of that. There was one time she did produce pancakes on Pancake Day. These were dessert treats, lovely sweet crepes flavored with orange juice and topped with powdered sugar.

On Tuesday, Feb. 28, at 5 pm, the Federated Church offers a Big Easy Mardi Gras party at the parish house. They say it is kid-friendly. Just bring an appetizer, soup, salad, entrée, or a dessert. They ask that you sign up in advance at 508-627-4421.

The Federated Church invites you to the Ash Wednesday service at noon, regardless of your faith, to mark the beginning of Lent.

George Washington was born on the 11th of February in the Old Style year. The Gregorian Calendar moved it to the 22nd. This year we were told to celebrate on the 20th, sharing his birthday with all the other presidents. I always liked it on the 22nd, because I thought everybody got a week off from school on her birthday.

Big bunches of birthday balloon wishes go out today to Anne Sylvester and Wendy Brophy. Saturday is a special day for Judy Cronig, Robin Mathiesen, and me too. Happy birthday to Susan Goldstein on Tuesday. Wednesday marks the 100th anniversary of the founding of Cronig’s Market. They will celebrate all month.

Heard on Main Street: Be nice, or your hard drive will kill your mouse. 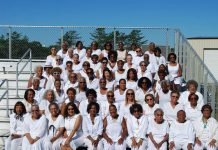