Last fall, the Featherstone Center for the Arts added a new class to their roster and welcomed a new teacher to their fold. The instructor is Island native and recent Vineyard returnee Lizzie Schule. The new class – Figurative Drawing and Painting —  is somewhat unique in that it’s not just a non-instructional live model drawing group, like others that can be found on the Island, but an artist-led series of lessons, demos, and sketch or painting time, and it is appropriate for all people from beginners and seasoned artists.

“It’s open to all levels,” says Ms. Schule. “It can be for people who have never picked up a pencil except to write write with it.” So far, both experienced artists and the newcomers have taken advantage of the weekly Saturday classes, affordably priced at $30 per class.

Ms. Schule encourages people to attend regularly but notes that students can also drop in and still gain something from an individual class. “Ideally, I want each class to build upon the previous one but if new people come to the next class it wouldn’t be any kind of problem.” The class has met three times already during the winter session which began on February 11.

The mix of ages and levels of experience has proven to be helpful. “When you have mixed abilities in something like a language class it’s very challenging’” says Ms. Schule. “But when you’re teaching drawing and painting I think it works well for people to have the advantage of learning from others and seeing each others’ work. It’s very democratic. I feel really lucky that everyone has a nice rapport with each other. We get down to work but it’s a really good vibe.” She hopes to curate an exhibit of her student’s work at Featherstone sometime in the summer.

Ms. Schule explains her approach to teaching. “I have a loose curriculum that I follow. I have a topic each week. I’ll start out talking about overall gesture and structure. Each class I begin with a brief demonstration or explanation of a new concept. It could be shading. Last time it was about drawing the head in perspective.”

“I talk and explain for 15 minutes and distribute hand outs and diagrams. Then we move into drawing the model. It will follow a different format based on whatever the topic of the day is. If I was doing a class on gestural drawing, we might spend the whole two hours doing quick poses. If we’re talking about anatomy and structure, the model might hold the same pose for the whole class.”

The course material found online gives some idea of the complexity of ideas involved in capturing the human form. Various class are identified as The Rib Cage and Pelvic Girdle Connection: The Twisting and Turning of the Spine and The Hands and Feet: The Expressivity of Hands, The Feet as A Platform.

All that might sound a bit intimidating to the novice, but Ms. Schule’s approach, while steeped in her considerable knowledge of anatomy, is based on the simple theory that increased knowledge of the human body and its movement will make figure drawing more intuitive and easier.

“Having some knowledge of the skeleton and musculature is very helpful,” she says. “Once you’ve internalized some of that you can rotate someone’s arm without looking at that specific posture. I just find it really inspiring and stimulating in the way that that this all carries over.”

For the second set of ten sessions, Ms. Schule gives people the option of continuing on with drawing or switching to portraiture and figurative painting using oil or acrylic paints.

Ms. Schule is primarily a painter herself. In 2015 she received her MFA in Painting and Printmaking from  the University of Iowa and then moved back to the Island – her childhood home. She has exhibited her work in various places around the country, including at Featherstone. The artist has taught classes for groups ranging from beginners to advanced art school students.

Currently Ms. Schule is working on a series of landscape paintings of the Island. She recently contributed three watercolors to a Nasty Women Art Exhibition in Iowa City. The Nasty Women shows are a nationwide initiative to raise money for reproductive rights organizations. “They wanted the theme of the work to be about women’s issues and what’s happening under the current administration,” says the artist. Now she is working on a series commenting on the impact of the new immigration laws on families for another Nasty Women show in New Haven.

“I don’t consider myself a political artist,” says Ms. Schule, “But I care a lot about politics and human rights. The more human side of it all just enters into my work at times.” 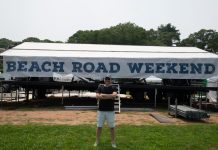 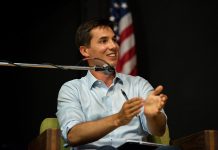