I should start by admitting this isn’t actually my bedside table, as my apartment is too small to fit one. So instead, my books are mainly stored away in boxes, still unpacked from my recent move to the Island. I dug a few of my favorites out, though.

I also have to admit that I’m not a huge leisure reader; I’m a little dyslexic and easily distracted, so reading ends up being less of a pleasure and more of an inner battle with my mind. So, I always give the excuse that I have to either be by a pool or at a beach — with little to no noise — to read. Being landlocked in central Pennsylvania for the past six years made that an easy justification for never reading. But now, here I am, living on an Island.

Now, this isn’t to say I don’t like books. I do. I’m just bad at getting around to reading them. That’s why my “bedside table” is filled with books I will finally make myself read on a beach this summer.

The first one I want to talk about is actually more of a coffee table book full of photographs. It’s titled “Political Theatre.” It’s filled with beautiful black-and-white photographs by Mark Peterson, a photographer based in New York City, of 2016 presidential campaigns from Ted Cruz and Bernie Sanders to Donald Trump and Hillary Clinton. The photos show a behind-the-scenes look of the campaigns and gives an unfiltered, gritty glimpse into the world of politics. When usually reading about politics is an agonizing nuisance, this book takes the strain out of the politics, and instead makes it art.

Next in my rather untouched stack is a book I’m not even planning to attempt to read: J.R.R. Tolkien’s “The Silmarillion,” which is the origin story of the world from “The Lord of the Rings” and “The Hobbit.” This one is my boyfriend’s, who just made me watch all three “The Lord of the Rings” movies (he was shocked I had never seen them). “The Silmarillion” is a tough read, apparently, and he’s been mustering up the courage to attempt it. So, we’ll see how that goes.

Next, of course, is my favorite, “Game of Thrones: A Feast for Crows.” This is the fourth book in the series by George R.R. Martin, and I’m really proud to say that I actually have read the other three (even though it took me nearly four years to do it). My boyfriend and I are huge GoT nerds and have watched every season close to 10 times by now. Reading the books, however, takes me longer, so I’m excited to finally finish them!

Lastly, I have my personal favorite, “The Great Gatsby.” Sure, it’s a little cliché, but this one in particular I love because I bought it — solely for the cover design — at the famous Shakespeare and Company bookstore in Paris a few years ago. I will probably eventually re-read it, but for now, it serves for nice decoration in my new, small apartment.

Gabrielle Mannino is the photo editor and a writer at The MVTimes. 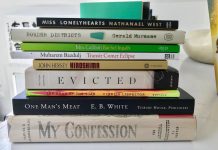 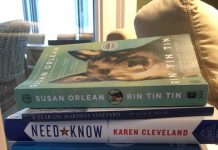 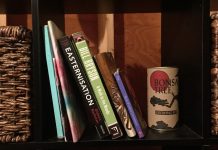