Each town on the Vineyard has its neighborhoods, and East Chop is one of the most distinct because of the geography that defines it, although disagreement exists over exactly why East Chop is variously defined as:

Before East Chop became known for its huge old mansions and quintessential shingled homes at water’s edge, the panoramic water views from the bluff, and for the East Chop Lighthouse that resides there, Ebenezer Smith had a sheep pasture  and in the early 1800’s he and his wife had a tavern, The Eastville Inn. Even more modest homes in the interior of the Chop offer a hint of water views.

The area is also famous for one of the first telegraph signals, originating on Telegraph Hill where the picturesque East Chop Lighthouse stands.  Telegraph Hill gets its name from a semapore that stood on the spot pre-lighthouse primarily, it appears, to trade gossip of ships passing by to Chappaquiddick and forwarded on to Nantucket.  The lighthouse was added to the National Register of Historic Places in 1987 at which time its famous brown color was changed to white to help protect the precious lenses from overheating.

East Chop became a popular summer resort in the late 19th century. A steamship wharf, known as Highland Landing or Highland Wharf, served regular ferry traffic from the mainland during the 1890s, and a horse railroad connected it to the village and the then two areas set aside for Methodist and Baptist camp meetings.  The site of the steamship wharf is now a beach and yacht club, The East Chop Beach Club formally site of a New York Yacht Club pier.

African-American history is featured prominently in the history of East Chop.  Though not specifically designed as a neighborhood for black vacationers, the construction of a wooden open tabernacle in 1877 – on a site where the New England Black Baptist Association had held meetings for years – “contributed to the Highlands becoming the first summer neighborhood for vacationing and homeowner African-Americans in the early 1900s.” In 1912, a former slave named Charles Shearer opened the first summer inn in Oak Bluffs that catered specifically to black patrons.

Fortunately, when the area was divided into homesites surrounding the no longer existant tabernacle, small parks were set off throughout the Highlands.  They have gone through several stages of ownership and are now cared for under the auspices of The East Chop Association. The deeds and bylaws of the organization state that these parks will forever remain as open space, never to be sold.

Some Perks of Living in the East Chop Area

East Chop has a wide range of home prices suitable for anyone looking for comfortable, year-round living, a summer vacation home possibly for retirement, or an investment property.  The options right now start with a charming two bedroom Cape style ranch in move in condition priced at $474,900. Located on Elliot Avenue, this property is close to downtown Oak Bluffs, public transportation, beaches, and tennis courts.  Property is suitable for year-round home or as a long term investment.

If you have family and friends to fill a 5+ bedroom, 3800 square foot  home, the traditional center hall colonial on Winemack Street priced at $1,149,900 is for you.  The views from the 3rd floor recreation and media room across Crystal Lake and Nantucket Sound towards the Cape have always been among my favorites.  As with all homes in East Chop, convenient to tennis, beaches, the harbor, public transportation and downtown. If, that is, you can ever pull yourself away from the views and all the “toys” you will need to fill the game room and basement.

Another home perfect for large families or large gatherings is a newer home overlooking the harbor and Nantucket Sound from its elevated position on Dover Street priced at $2,475,000 fully furnished. This 3800 square foot home has everything a luxury home should: central A/C, media room, double-sided fireplace, gourmet kitchen, and featuring beautiful landscaping with lush green lawn.  Another one of those spots you will never want to leave is the 3rd floor master bedroom suite with a deck and views across the sound.

Among the most prestigious properties on the Chop is the historic waterfront estate with a boathouse and deep water dock located on Temahigan priced at $4,995,000.  I remember the first day I viewed this property.  I first walked out across the wooden boardwalk that crossed over a small pond, leading to the water’s edge, greeted by a 750-sf boathouse  adjacent to a deep water dock and moorings. I could survive with just that building. With open rafters, beach stone fireplace and french doors opening to your beach and Nantucket Sound, I would never leave.  You will need to read the listing information to appreciate all this 6,000 square foot home, originally built in 1870 and renovated top to bottom maintaining  all of the original character and architectural details of the era, has to offer. 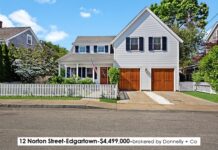 Real Estate Confidential: A slight movement in the market 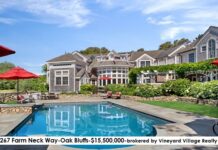 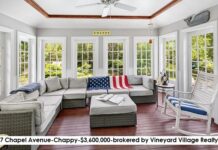 Real Estate Confidential: The joy of a screened-in porch