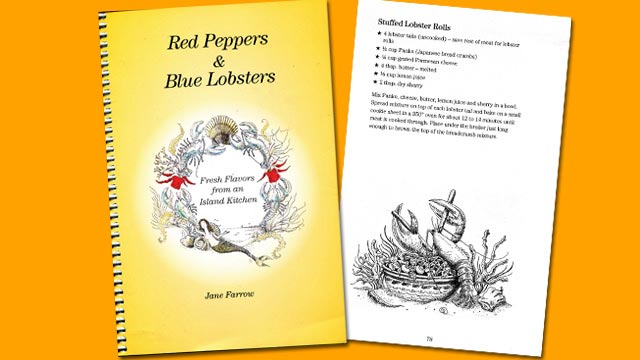 For almost 30 years, Jane and Ted Farrow were fixtures on Main Street, Edgartown, operating their store, Tashtego, a colorful and modern home furnishing store with upscale furniture, kitchen gear, and treasures from near and far.

Mr. Farrow was an architect with a great eye for space and design. He was summer resident on the Vineyard since he was a kid, and moved here full time in the late 60s when he opened the store.

Ms. Farrow had also summered on the Vineyard most of her life, and she and Mr. Farrow had known each other since they were teenagers. Newly divorced, she was also ready for a change and moved full time to the Vineyard with her three sons. She became business partners with Mr. Farrow and soon after, life partners — they were married in 1973.

“Ted had a great eye for space,” Ms. Farrow recalled, and she had the creativity to fill Mr. Farrow’s design space in Tashtego. She added her love for anything culinary, including kitchenware, high-end equipment, dinnerware, and cookbooks. Together this power duo enjoyed a life of family, travel, love for the sea, and good food, which is apparent in Ms. Farrow’s newly published cookbook, “Red Peppers & Blue Lobsters.”

Ms. Farrow liked to cook. The Farrows worked together all day at the store then headed for the hills of Chilmark where Ms. Farrow immediately got to work preparing dinner for her husband and her three sons.

“I think we were unusual: we spent all our time together, working, traveling, living, and we just got along,” Ms. Farrow recalled.

From the beginning of their 38 years together, Ms. Farrow’s flair in the kitchen was appreciated. Mr. Farrow insisted she write down recipes and keep track of all her wonders from the kitchen. She compiled recipes and continued to cook, throwing fabulous Vineyard-style dinner parties for friends and family.

By the 90s, Mr. Farrow inspired his wife to share her love and talent for food by publishing a cookbook. Encouragement also came from a friend and employee at Tashtego, Alison Leslie. Ms. Leslie offered to illustrate the cookbook, and Ms. Farrow loved the idea of partnering with her talented friend. The two women spent days driving around the Island capturing images of the Island for Ms. Leslie to work from. With the illustrations in hand Ms. Farrow began submitting proposals to big publishers, but got nowhere.

“A few publishers liked the idea but felt the book was too local,” Ms. Farrow said. “But Ted never gave up.”

At this time they started to rethink the traditional method of publishing and looked into self-publishing. In 2010, Mr. Farrow made the big push. “Let’s get it done!,” he urged.

However, in 2011, Mr. Farrow died a after a fall in which he hit his head. Some 15 months later, after the dust settled, and with continued support from Ms. Leslie and now Ms. Farrow’s daughter in-law Trisha O’Connell, “Red Peppers & Blue Lobsters” was published.

A bright yellow spiral-bound book, “Red Peppers & Blue Lobsters” is packed with more than 200 recipes created, adapted, or passed down in categories from appetizers, soups, salads, eggs, to desserts. It is a remarkable labor of love with personal stories and memories attached to many of the recipes. And Ms. Leslie’s Island-inspired pen-drawn illustrations are on almost every page.

Ms. Farrow grew up in Maryland with women who loved to cook, especially bake. Like many creative cooks, she claims not to be an expert at baking but instead loves the flexibility of cooking. Looking through her wide-ranging cookbook, it’s clear that she is quite handy on the sweet side of the kitchen as well.

The cookbook is a collection of mostly simple, homespun, and personal recipes incorporating a well-stocked pantry with ingredients found on the Vineyard as well as influence from travels to Mexico and her life after the Vineyard on the west coast of Florida.

The recipes are short and to the point without a big emphasis on steps. You can feel Ms. Farrow’s confidence in the kitchen.

She claims soups are her favorite thing to cook, and she has included 30 soup recipes such as Maryland crab soup, which is more of a description than a recipe from her childhood. There is a crazy sounding Gingersnap and Cabbage soup. She herself had doubts about this recipe a friend gave her, and she claims it is a winner.

Overall, the book represents Ms. Farrow’s life’s journey through food shared with her husband; her three sons, David, John, and Peter Damroth; and their many friends. And though Mr. Farrow never got to see “Red Peppers & Blue Lobsters,” he certainly lived it and wrote the foreword in the book: “A Toast to the cook, God bless her!”

Tina Miller of West Tisbury grew up on Martha’s Vineyard and has been working with food for her whole career. She is the author of “Vineyard Harvest,” a cookbook, and has contributed to Bon Appetit and Edible Vineyard, among other publications.