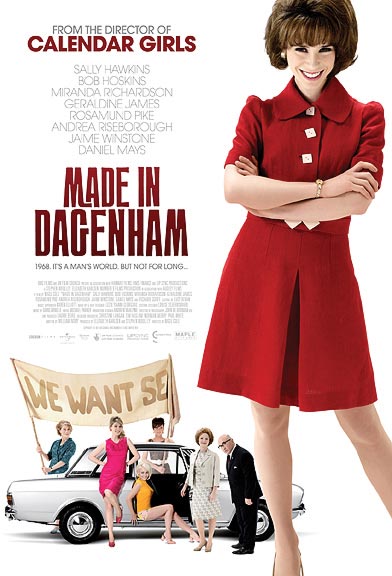 As Republican governors push to cripple unions in some states, “Made in Dagenham,” coming to the Capawock Theatre on March 12, will remind moviegoers of how a small group of women union workers in England called Ford Motor Company to account in a 1968 strike for equal pay. It’s a heartening message from a more optimistic time.

Although “Made in Dagenham” portrays the toll the women’s strike took on family, ambivalent union leadership, and the 55,000 male workers at the British plant, it focuses front and center on the principle behind treating women workers equally. The story is well-crafted and emotionally engaging, with rousing Sixties music.

The movie does not exactly qualify as a feminist manifesto, though. Stripping down to their bras in a sweatshop plant environment, the female machinists, who stitch car seat covers, are not above catcalls when men enter their enclave, or flirtatious poses before newspaper photographers.

The effervescent Ms. Hawkins, who won a Golden Globe for her portrayal of Poppy in “Happy-Go-Lucky” (2008), turns Rita into a shy, deferential, if not quite simpering activist, despite her determination to lead the women to equal pay. Secretary Castle comes across as a bit of a battle-axe, and Lisa (Rosamund Pike), the Cambridge grad married to a Ford executive, keeps her resentments toward her husband mostly buried.

The Dagenham strike made history, including changes in Ford Motor’s policies, and improved wage treatment for women in the U.S. and worldwide. Let’s hope that current anti-unionism in the U.S. fades fast.