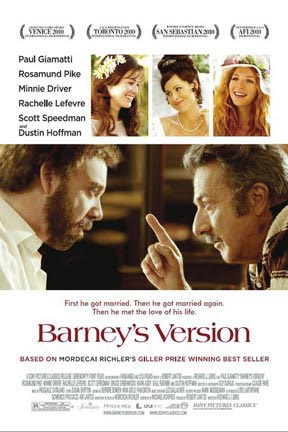 Get ready to meet Barney Panofsky, the Montreal-based, lovable bupkis who charms and disarms, in the comedy, “Barney’s Version,” screening at the Katharine Cornell Theatre on Saturday, May 28, under the auspices of the Martha’s Vineyard Film Society.

Played by Paul Giamatti (Oscar nominee with credits in about 70 films and television), Barney is the doe-eyed, cigar-smoking, scotch-swilling man’s man who recounts the story of his misbegotten life in flashbacks to the audience. Mr. Giamatti won a Golden Globe for his performance.

The fun starts when Barney shows up in the first 70s flashback with an assortment of pals in Italy, including Boogie, a drunken failed novelist (Scott Speedman). “Barney’s Version” is based on the novel of the same name by the late, much-beloved Canadian novelist Mordecai Richler, who is probably best known in the U.S. for his 1959 novel, “The Apprenticeship of Duddy Kravitz.”

In his own, screwed-up way, Barney is a good guy, so when his hippy girlfriend Clara (Rachelle Lefevre) turns up pregnant, he does the right thing and marries her. Unfortunately — or not — the baby is stillborn. Clearly, Barney did not father the dark-skinned infant, and Clara commits suicide shortly thereafter.

In some cases such events would be, if not tragic, at least a little sad. Barney, however, has a knack for rolling with the many punches life deals him. He is a survivor of disasters that are mostly of his own making. He returns to Montreal, where he becomes producer of a dreadful TV soap opera about a Canadian mountie and a nurse. When he meets a Jewish princess (Minnie Driver) with a rich dad, he decides to remarry.

The second marriage instantly turns into a mistake, epitomized by Barney’s encounter at the wedding with the love of his life, Miriam (Rosamunde Pike, who played Lisa in “Made in Dagenham”). Along the way, Dustin Hoffman shows up as Barney’s retired-cop dad, Izzy, and gives his son a pistol as his wedding present.

Barney escapes from the wedding reception to chase after Miriam, trying to convince her to run away with him. The sanest of his brides, Miriam refuses. That is, until Barney frees himself from his Jewish princess once he discovers her schtupping his friend Boogie. For reasons hard to fathom, Miriam succumbs and agrees to marry Barney. Balding, pot-bellied Barney is not exactly a hunk.

It does not really spoil the story to report that Barney fires a couple of shots from the pistol his dad gave him in the vicinity of Boogie, who plunges into the lake at Barney’s summer cottage. That information has already been divulged early on.

Director Richard J. Lewis tips his hat to three of Canada’s top film directors, who show up in cameos during “Barney’s Version.” They are Atom Egoyan (“Ararat,” “The Sweet Hereafter”), David Cronenburg (“A History of Violence,” “The Fly”) and Denys Arcaud (“The Barbarian Invasions,” “The Decline of American Empire”).

In the end, “Barney’s Version” doesn’t live up to its promise. Mr. Lewis, who produced 54 episodes of “CSI: Crime Scene Investigations” between 2002 and 2005, doesn’t seem to know how to bring out the best in the accomplished actors in his cast and the material he has to work with.

As much of a trooper as Mr. Giamatti is, he never brings Barney quite into focus, and despite the rich material the novel has provided, the jokes don’t seem as funny as they should be. If only for the pleasure of seeing him and Mr. Hoffman at work, though, as well as the superb Ms. Driver and Ms. Pike, “Barney’s Version” is well worth the viewing.