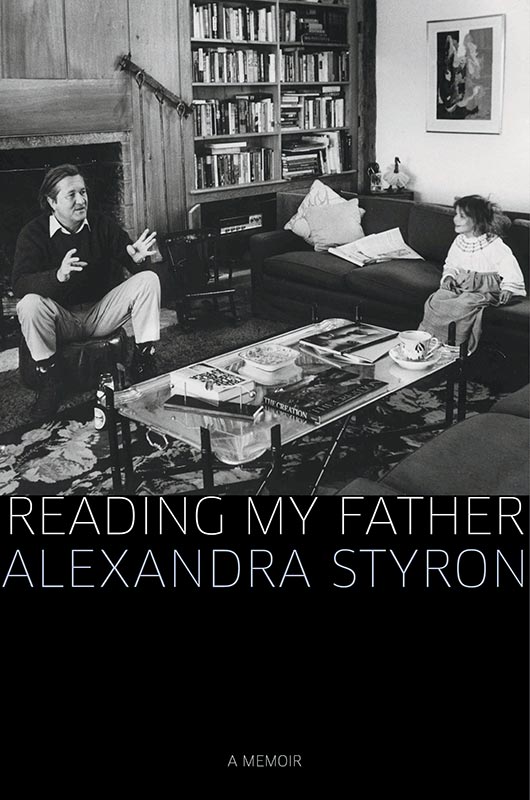 Told with straightforward candor, remarkable objectivity, and the elegance of a well-honed craft, “Reading My Father: A Memoir” by Alexandra Styron offers every privileged bit of information you’ve wondered and wanted to know about the inner workings and private family dynamic of an iconic writer.

He married the affluent and charming Rose Burgunder from Baltimore, fathered four talented children (Alexandra Styron is the youngest), became enmeshed in a culturally elite circle of powerful friends that included the Kennedys, Truman Capote, James Baldwin, Norman Mailer, Leonard Bernstein, Arthur Miller, and Mike Nichols, and socialized with an A-list of literary, stage, and film stars including Marlene Dietrich, Laurence Olivier, Lena Horn, and Tennessee Williams. Ms. Styron recalls, as a youngster, looking out of an upstairs window to watch Frank Sinatra in the family’s outdoor shower.

It was from all appearances, a glamorous and idyllic existence.

But William Styron was plagued with debilitating depression (hospitalized twice and treated with electric shock therapy), drank excessively, had a cruel temperament and regular fits of moodiness, and was an unfaithful husband (a fact known to his wife). Mr. Styron inspired loyalty, but exacted an emotional toll on those close to him.

Ms. Styron writes: “At times querulous and taciturn, cutting and remote, melancholy when he was sober and rageful when in his cups, he inspired fear and loathing in us a good deal more often that it feels comfortable to admit.”

She describes a childhood incident when, her mother having gone out, she was left at home in the care of her seven-year-old brother Tom and nine-year-old sister Polly, who played outside while baby Alexandra rolled around in her walker inside. When the two came in they found Alexandra, still in her walker, lying at the bottom of the basement steps where she’d fallen. They held her until their mother returned and rushed her to the hospital.

Ms. Styron writes: “But I was in my thirties before Polly confessed a detail I’d never known: our father was upstairs napping the whole time. Afraid for her own life as much as mine, she couldn’t bring herself to wake him.”

What sets this biography apart is the restraint and equanimity with which the story of her father and of her family is revealed. There seem to be neither scores to settle nor issues to resolve. Without mincing the truth, Ms. Styron (nicknamed “Albert” by her father), manages to temper her account with endearing moments.

“What remained between my father and me was our enduring common ground, and practically the only place we ever met: our shared sense of humor…But above all, I soothed my father’s savage breast by making him laugh — and standing up to even the most extreme of his humor in kind.”

And when describing the discord her father’s illness churned, she is sensitive to the toll it took on him as well as on others.

“When, at sixty, liquor disagreed with him, he was surprised to find himself thoroughly unmanned. For many years after his ’85 episode he maintained a fragile equilibrium. But the scars were deep, and left him profoundly changed. He was stalked by feelings of guilt and shame.”

The book begins with the 2006 funeral of her father held on Martha’s Vineyard, and from there proceeds forward and back, detail by detail, through triumphs and travail. Much of the information was found in the Duke University library (William Styron’s alma mater), where she discovers boxes of her father’s correspondence, essays, scrapbooks, six unfinished manuscripts, journals, and the Wanamaker Diary he kept since 1939.

“Reading My Father,” offers a detailed and intimate history of the two sides of the author’s family — both are a fascinating study — and reveals the verities of family life in their various homes, in New York, then Roxbury, Connecticut where her parents lived together for close to 50 years, and in Vineyard Haven, a place all the Styrons loved: “Happiness loomed on the horizon, just a day’s drive and a short ferry ride away.”

Alexandra Styron, who wrote the novel, “All the Finest Girls,” in 2001, assumed a daunting task in sorting through her father’s complicated and emotionally fraught life, of which she was a part. But it would be hard to imagine this biography of Willian Styron written better by anyone else.

As Ms. Styron admits: “Somehow, in the time since his death, I’d mentally misplaced him. I thought, if I heard his voice, shifted through his epistolary remains, he’d resurface — which he did, and then some.”