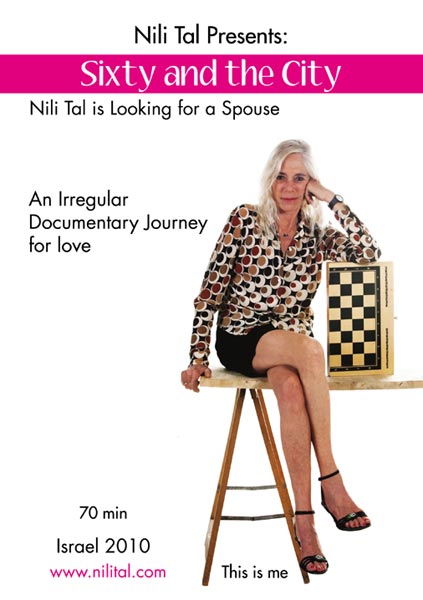 When veteran Israeli documentary-maker Nili Tal turned 60, she decided it was time to partner up again after years as a single woman. “Sixty and the City,” presented by the Martha’s Vineyard Film Society and playing at the Katharine Cornell Theatre on Saturday, June 4, tells the story of her adventures with online dating.

“Sixty and the City” is a long ways from the legendary TV series “Sex and the City.” Rather than the Big Apple, it takes place in Israel, without much emphasis on the “City” part of the title. Plus, it’s one thing to be a 30-something Carrie Bradshaw on the make, and quite another to be a divorced grandmother with wrinkles and wispy, unkempt semi-blonde hair, looking for a twilight lifetime of cuddling.

Ms. Tal begins her odyssey playing backgammon with a male friend on a city sidewalk.

Because she is making a film about dating at 60, her prospective partners have to be willing to expose themselves to the camera.

After the director changes her straight-on, serious-looking photo for a sexier one, she receives 1,320 hits from online dating sites. Her first on-camera date, Beber, lives in a bomb shelter in Eilat, an Israeli port on the Red Sea. A retired singer, he warbles a few tunes for the filmmaker but confesses he’s looking for a younger, dark-haired woman.

A friend consoles Ms. Tal that everyone feels younger than they really are, and the director decides to consult Iris, a marriage counselor who insists on taking her shopping for a wardrobe in red. But Ms. Tal prefers black and retains her own inimical style.

Meir is the next prospect. He invites Ms. Tal to meet him on his yacht, saying he wants to marry her. So much for yachts.

After passing up 15 more candidates who refuse to be filmed, Ms. Tal is intrigued enough by Ran Cohen that she invites him home.

This one looks like a real possibility, until he declines her offer to join her at a movie. When Ms. Tal goes by herself, guess who’s there with another woman?

Next comes Edouard, who proves worth traveling to France for. After a pleasant weekend at his country house, though, the director heads for New York to visit her son, alone.

The list of senior-citizen dating “to-do’s” includes Botox shots, a trip to a disco, a visit to married friends, and a singles cruise with a mate-seeking girlfriend Dorit.

“This feels like a prescription the doctor keeps telling you to refill,” the droll and worldly Ms. Tal complains. It’s a relief to watch a woman of a certain age who may be seeking male company but is not willing to “glam” herself up too much in fancy clothes and ill-advised hair or makeup changes. Archival photos of Ms. Tal in her twenties reveal that she was a knockout in her younger days. “I look like my Aunt Bella,” she mutters after dressing up once in a long evening gown for a shipboard event.

Is the struggle to find Mr. Right worth it in the end? You’ll need to watch the film to find out the answer to that question.

Along the way, the audience will either roll on the floor laughing at — hopefully with — the filmmaker and her dilemma, or cringe with embarrassment at the contortions necessary to put yourself back in the dating scene these days. Either way, pursuing the opposite sex in your sixties takes plenty of chutzpah, particularly if you choose to do it with camera in hand.

Brooks Robards, who divides her time between Oak Bluffs and Northampton, is a frequent contributor to The Times.