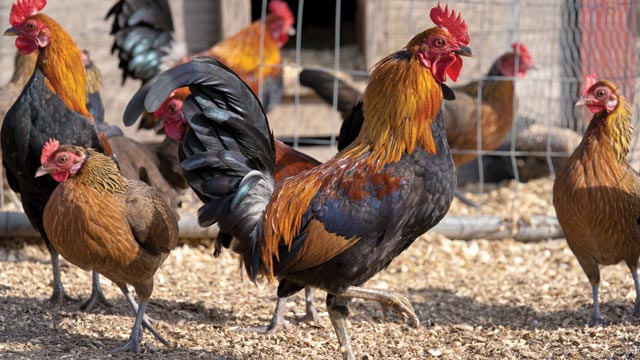 Many complaints about Rupert (See related story and video, “Rupert has law on his side”) concern his crowing around the clock.

The Times asked poultry expert Theresia Lavergne, a professor with a specialty in poultry in the School of Animal Sciences at Louisiana State University’s Agricultural Center, why the Ruperts of the world do that thing they do so well.

“Most birds sing in some form or another, and crowing is the ‘singing’ of the rooster,” Ms. Lavergne answered in an email. “Roosters crow for many reasons including: reacting to a disturbance, reacting to almost any kind of sound (cars, people, other roosters, other animals, etc.), guarding their territory, feeling threatened, a predator is ‘trespassing’ on their territory, or just communicating with other chickens.”

Crowing is one form of communication in chickens, and surprisingly, it is possible for some hens to crow as well, she said.

Since roosters and chickens are usually most active in the morning, that is when people notice more crowing, Ms. Lavergne said. “But they can crow 24 hours a day, and some do.”

Most roosters crow at daylight because the change from dark to light encourages crowing, she added. “If we were to keep roosters in a coop that is dark and then turn on a light, they would crow when we change their environment — or turn on the light.”

Apparently it’s not only the people living near Leonard Circle who wonder why roosters crow. A Google search turned up more than 700,000 entries.

At Homesteading Today, an “online forum for neighborly help and friendly advice,” Denise K. said she was awakened at 4 am by her rooster and asked why it needs to crow.

Why Roosters Crow – Among the less scientific replies:

Sewsilly: “Natural instinct is why … and the world revolves, and it happens again. You get used to it, or you have chicken salad.”

Oggie: “After much research and experimentation, it has been discovered that roosters lack the physiological structure to enunciate: Hey, Baby!… How ’bout it, Baby!…Come on, wake up, Baby!…And so they crow. They also just barely lack the mental capacity to pout.”

A visit to the BackYardChickens Forum found the question of why roosters crow posted by rebecca10782.

AK-Bird-brain from Sterling, Alaska, replied: “To tick off the neighbors!” And, “It’s hard to soar like an Eagle when you’re surrounded by Turkeys!”