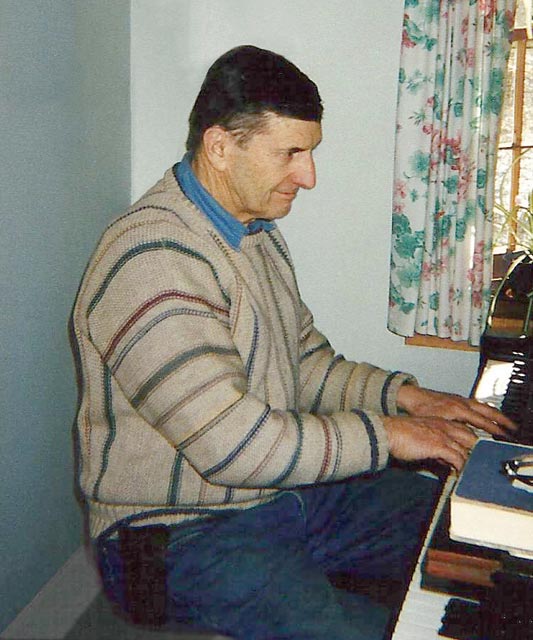 Eliot Eldridge Macy, known to almost everyone by his nickname “Bud,” died on June 27, surrounded byfamily, at his home in Vineyard Haven. He was 90 years old.

He was the great-grandson of “Chart” George Eldridge and grandson of George W. Eldridge (“TheCaptain”), founders of the Eldridge Tide and Pilot Book, which is still in the family and still publishedannually. In 1978, Bud wrote “The Captain’s Daughters,” a history of Martha’s Vineyard seen through theeyes of Bud’s mother Mary and her three sisters, who grew up on the Island.

Bud was born in the Roxbury section of Boston in 1920 and was raised in Worcester, and Toledo,Ohio, cities where his father Paul, a Congregational minister, had parishes. Summers, however, were spentat the Vineyard. Bud’s Aunt ran a summer camp at Lake Tashmoo, and Bud and his older sister Nina passed many happy summers at the lake, enjoying the companionship of numerous cousins.

It was during these boyhood summers that Bud met his future wife, Susan Hyde. Susan’s father, BobbyHyde, had purchased property on a deserted sandspit at Herring Creek, where he’d decided to build acabin for his family. Bud’s family watched the construction skeptically from their house on the other side of the lake, thinking only a naive Californian like Bobby would attempt to build anything on a spot soexposed to the elements. Today, almost a century later, many houses stand in a row on that vulnerablespit of sand, still defying the waves, the salt air, the relentless winds, and the caprice of the shifting tides.

Bud attended Bancroft School and Tabor Academy and spent his senior year of high school studying atWestminster School in England. He is a graduate of Yale University. Strong and athletic, Bud crewed forthe Yale varsity rowing team, serving as the pace-setting “stroke” first oarsman. Grandchildren wereamazed by how quickly their 85-year-old grandfather could row a boat across Lake Tashmoo.

On the 4th of July in 1942 Bud and Susan were married in New York on the banks of the Hudson River.Their wedding is remembered as a magical affair that was staged in a romantic pergola at the foot of awaterfall, the bride and her attendants arriving by boat.During WWll Bud completed his alternate service as a conscientious objector, and when the war was overhe traveled to Finland under the auspices of the Friends, to help rebuild after the terrible devastation there.

As a young couple, Bud and Susie headed to California and settled in Santa Barbara, where Susie had extended family. High on a chaparral hillside overlooking the Santa Barbara Channel, Bud and his father-in-law constructed the family’s new home. The growing Macy family (five kids, in all) lived in SantaBarbara for many years, but they returned to the Vineyard almost every summer, traveling cross-country in their station-wagon with Bud at the wheel.

In 1952 Bud built (with the help of those many Vineyard cousins) a summer cottage on the shore of Lake Tashmoo. “The camp” stands there still and has been cherished by the family for three generations’ worth of summers. The Macys narrowly escaped disaster during Hurricane Carol in 1954, when a violenttidal surge slammed into the lake. The family managed to flee to higher ground just in time as the waters engulfed the camp, lifting it off its foundations and nearly washing it away. Undismayed, Bud recovered the half-wrecked house from the flooded marshes, hauled it back, and repositioned it in its former spot (ah, the help of those SAME cousins!) — this time on HIGHER foundations!

Bud was a music lover and one of his favorite ways of unwinding was to play his favorite piano pieces(Beethoven, Bach, Prokofiev, etc.) on his handsome Steinway parlor grand. Among his family’s fondestmemories are the times spent gathered around the piano, singing to Bud’s accompaniment — traditionalfolk songs and at Christmastime, of course, carols.

Besides his gifts for music and his ability to create anything with his hands, Bud had great personalgifts as well. His energies were always focused firmly on serving “the greater good” of others. His preference was to avoid the spotlight and serve quietly as a force behind-the-scenes. He was known for his peace activism, particularly during the divisive Viet Nam era. His steadfast strength of character, his personal charm, and his gift for thoughtful listening won him wide respect even among those who didn’t share his political views. He was an inspirational father and his children adored him.

Soon after Bud and Susie moved to the Vineyard year-round in 1974, Bud earned his master’s degree inpsychology from Boston State College. He practiced family therapy both privately and at Martha’s VineyardCommunity Services until his retirement in 2001. He was instrumental in founding Hospice of Martha’sVineyard, was on the board of Habitat for Humanity, was a co-founder of the Vineyard Whole HealthAlliance, and was an active participant in Partners Apart and Big Brothers/Sisters.

Robust and energetic deep into his eighties, Bud’s “retirement” gave him ample time to manuallydismantle (almost single-handedly!) his parents’ old summer-house. A new, winterized house was thenbuilt on the same site, where he and Susie have lived ever since.

As his failing health kept him from getting out as much, Bud stayed right up with the times byjoining his son-in-law Ted (in New Jersey) most mornings via SKYPE videocam for an extended sessionof cribbage-playing! Bud’s other constant companion, besides his treasured Susie, was his daughter Jill,who lives on the Island and has stopped in faithfully almost every day to help keep all her folks’ importantaffairs shipshape and spread sunshine with her visits.

He is survived by his wife Susan Borden Hyde Macy (July 4th would have been their 69th anniversary); son Timothy Macy and wife, Barbara, of Franklin Lakes, N.J.; daughter Jill Macy of West Tisbury;daughter Sarah Macy and husband, Ted Pedersen, of East Rutherford, N.J.; son Michael Macy and wife,Ann, of Santa Barbara, Calif.; and son John Macy and wife, Joy, of Blauvelt, N.Y.; and ten grandchildren and three great-grandsons. He was pre-deceased by his sister, Nina Ruth Maurer.

A memorial will be held in September on a date to be announced in this paper.