The Wampanoag Tribe of Gay Head (Aquinnah) last week announced it would file a lawsuit against the Department of the Interior Bureau of Ocean Energy Management to block the Cape Wind project.

The Aquinnah Wampanoag complaint cites multiple violations, including irreversible alterations, significant adverse effects, and the destruction of historical, cultural, and spiritual tribal resources through the permitting of the Cape Wind project, according to a tribal historic preservation office press release.

“Cape Wind will destroy our traditional cultural property, Horseshoe Shoal and the surrounding Nantucket Sound, where our Tribe has flourished and continues to utilize for significant cultural and spiritual ceremonies and practices,” Bettina Washington, tribal historic preservation officer, said in a press release.

The lawsuit was no surprise. In a press release issued following Secretary Salazar’s announcement, the Wampanoag Tribe, which had opposed the Cape Wind project on cultural grounds, said it was disappointed and would explore all its options including injunctive relief.

Federal law required consultation with Native American tribes as part of the Cape Wind permitting process. Members of the Mashpee and Aquinnah Wampanoag tribes opposed the project, claiming that the wind farm would interfere with their view of the rising sun, an important element in tribal ceremonies. And, they said, the wind farm would be built on a shoal that was dry land thousands of years ago and remains a sacred burial and cultural site.

The official 75-page Department of the Interior record of decision included provisions for millions of dollars intended to mitigate the tribe’s cultural concerns. With its decision, the Wampanoag Tribe joins a train of organizations in court action led by Alliance to Protect Nantucket Sound.

As part of the complaint the tribe said the destruction of the shoal floor would “obliterate the ancient archeological site and evidence, critical to potentially understanding their ancient human occupation of this hemisphere.”

The tribe also said the 440-foot high turbines would obstruct the eastern vista and view across Nantucket Sound, “one of the most significant aspects to their identity and spirituality.”

Ms. Washington said the tribe is not against renewable energy projects, but would pursue all options, including legal action, to protect its cultural heritage and places.

Even as the tribe has opposed Cape Wind it has continued to explore the potential for wind turbines on tribal lands in Aquinnah. In November 2010 the tribe released the results of a state and federally funded study that concluded that vigorous winds blow over the tribal lands, and if they are harnessed they could provide the tribe with financial and environmental benefits.

In an email to The Times Tuesday, Mark Rodgers, a spokesman for Cape Wind rejected the tribe’s claims that Horseshoe Shoal figured large in the tribe’s cultural history.

Mr. Rodgers said prominent members of the Aquinnah Tribe have questioned these claims and said that Cape Wind does not threaten their cultural resources.

He was referring to a letter Jeffrey Madison sent to Mr. Salazar, and supported by a statement signed by eight members of the tribe including Beverly Wright, a tribal council member and former five-term chairman of the tribe, that disputed the tribe’s claim about the cultural value of the Cape Wind site.

Mr. Madison, a former tribal council member, is a lawyer with the law firm of Wynn and Wynn hired by Cape Wind to assist in its push to overcome opposition to a wind farm.

“As to the sunrise ritual,” Mr. Rodgers wrote, “Aquinnah is on the other end of the Island and does not overlook Nantucket Sound and that objection, as far as we know, did not even surface until 2008, which begs the question, if it were such an important objection why did it take six years for it to be raised?”

Mr. Rodgers said Horseshoe Shoal was last dry ground sometime between 5,000 and 10,000 years ago. He said that while there is no direct evidence of human habitation of these areas, Cape Wind would take steps to avoid disturbing any submerged archaeological resources.

“Opponents have been litigating against this project since 2002 and have lost each and every legal decision to date,” he said. “The permits they are challenging are the result of the most comprehensive and thorough review of any energy project in the history of New England, and we are confident the permits will be upheld and that the legal challenges will fail.” 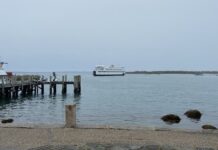