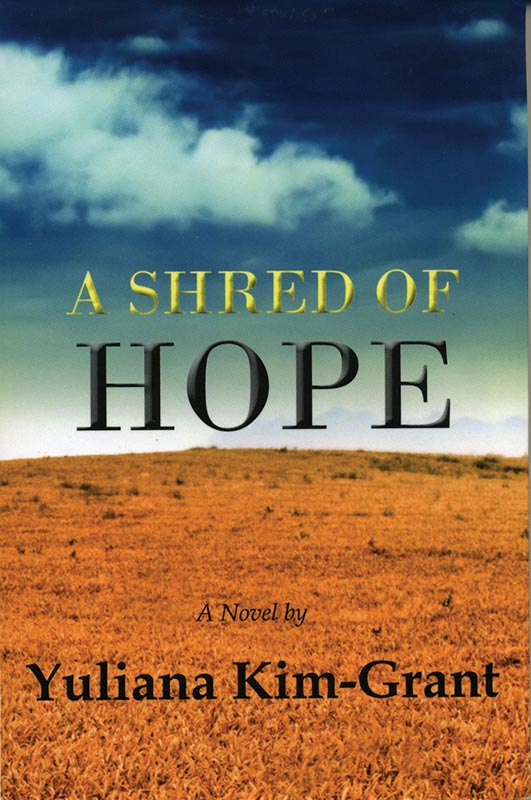 Every once in a while, it’s the cool of the evening for book reviewers. We get a great read we weren’t expecting. “A Shred of Hope” by Yuliana Kim-Grant is a great book. This is her first novel. You will see more from her.

The story begins in the present with a nutcase fatally shooting a 30-something biracial married couple (she’s Korean, he’s African-American) in a New York subway. She was a teacher, he was closing in on top-gun status at a Manhattan law firm. They were winning. Life was good, until a drooler walked into their subway car and they were dead before the next stop.

The full measure of the tragedy unfolds as we learn that Jane Park’s Korean parents, a doctor and a classical music teacher, had rejected her choice of an African-American mate. For 12 years, their only contact was a Christmas card. Jane’s relationship with her in-laws was strong and healthy.

We are left with the aftermath. Parents grieving lost children. The Park parents have the additional pain of a broken relationship with their child that cannot be fixed in life. There is additional angst between the surviving families, clear overtones of culture clash in the Korean parents’ generation, as well as racism of a variety we don’t often consider.

There’s a lot going on and here’s where good writing really matters because writing authentically about interior life is difficult. Bathos and polemics can destroy a story at the drop of an adjective. Not here. Ms. Kim-Grant shows discipline and a taut, consistent, and clear voice as the third-person narrator.

“I worked really hard on Mrs. Park. It’s easy to vilify her for her actions but we all see perfectly good people make horrible decisions,” she said.

We watch the characters, each carrying a distinctly different satchel of pain, struggle to answer the two questions of those left behind: “How will I survive?” and “Do I want to?”

Mrs. Park, Jane’s mom, engendered the strongest rooting interest for me. Imagine watching your dead child’s wedding day for the first time, 12 years after you chose not to attend it. The scene in which the two mothers unexpectedly find themselves cleaning out the dead couple’s apartment will resonate with anyone who’s ever had to put away a loved one’s things.

Ms. Park must decide to become a mother. Not a Korean mother, not a guilt-ridden mother, not the subjugated wife of an unyielding husband. She has a cache of 25 diaries left by her daughter to help. The author uses the diaries deftly as well, inserting daily entries as mileposts over the last 12 years of Jane’s life.

The author’s message is clear.

Consider that the couple met at a college registration desk because they had the same last initial. They died because a psychopath happened to enter their subway car. We can’t control those things, but we can control intention and action in our relationships.

Ms. Kim-Grant is a Korean-American with an MFA in creative writing fiction from Emerson College. The Philadelphia native lives in New York City and on the Island with her husband and son. She serves on the board of the Bronx Prep Charter School and has survived teaching English Composition 101 at a Southern California junior college.

In a phone conversation on the Island this week, Ms. Kim-Grant said her life informed her novel. “My husband is African-American and my family was taken back at first. Our relationship is fine today but I was struck by the impact of old attitudes on the complexity of America as it is today.

“We are a commingled people. Everything is ‘inter- something,’ she said. “So we often have to navigate our relationships with each other.

“I think my parents were most taken back by the ideas and thoughts I included in the book. Thoughts and ideas I’ve had since I was a child; details of what’s in my head, and things I noticed as they moved into this new world of theirs.

“They had no idea I was thinking about those things.”

Ms. Kim-Grant will discuss her book from 4:30 to 7:30 pm Sunday afternoon, July 17, at a book signing at Isabelle’s Beach House at Penacook and Seaview Avenues in Oak Bluffs.

Jack Shea, of Vineyard Haven, is a frequent contributor to The Times.