Soon after the ferry docked, Brock Callen, president of Sail MV, the Island nonprofit devoted to promoting sailing to young Vineyarders, drove a pickup truck off the ferry. Behind it was a large trailer carrying six brand new sailboats, Collegiate 420 racing dinghies. Mr. Callen pulled the truck to the side and hopped out, all smiles. The student sailors, all smiles too, swarmed around the boats.

The 420s are primarily for use by the MVRHS varsity sailing team. In competition, each is sailed by two sailors in three-boat teams. The six new boats will bring the team’s fleet total to 12.

The boats were paid for by donors who responded to Sail MV’s fundraising efforts. Mr. Callen said the six boats together cost close to $40,000.

“The new boats were funded in part through the extraordinary generosity of a group of Sail MV benefactors at the 2010 Seafood Buffet and Auction,” Mr. Callen said. Auction proceeds paid for several of the boats, but Sail MV needed more.

The donations were made to Sail MV’s Fund a Need initiative and, Mr. Callen said, the following December, “out of nowhere a check arrived from another benefactor for the balance.” The students raised the money for the new jackets, he said.

This is the first time in 15 years that Sail MV has been able to purchase brand new 420s for this program, Mr. Callen said, “We always purchased used boats in the past.”

The new boats are fiberglass and made by Zim Sailing of Warren, Rhode Island. The boats are 4.2 meters, almost 14 feet, long. They are rigged with two sails, called either “Bermuda” or “Marconi” rigged with a mainsail and a headsail. The 420 has a centerboard. They are set up for two sailors. Teamwork is required to sail these speedsters well, according to the team’s sailing coach, Andrew Burr. The class is recognized by the International Sailing Federation and is sailed in college competitions as well as the high school level.

“I expect this year’s team will have between 22 and 25 sailors, a marked step up from previous years.” coach Burr said. “Twenty-four is the ideal number now that we have 12 boats.” The MVRHS team has two sailing seasons, one in fall that ends in October and a spring season with three weeks of practice in March before the first race on April 7. The racing continues into June.

The teams compete in team sailing, which is three two man boats from each of two teams sailing against each other through an ‘N’ course, named for the shape of the course. The finish order of each boat contributes to the team’s score, so the boats have to work together.

Each race usually lasts only 10 to 15 minutes. “It can be fast, and it is fun to sail and to watch, Mr. Burr said. “It’s like fast chess on the water.”

The team has a crowded schedule with spring meets or regattas every week and on several weekends. The Vineyard team competes in the Cape and Islands League against Barnstable, Nauset, Dartmouth, Bishop Stang, Nantucket, Falmouth, Dennis-Yarmouth, Bourne, Sandwich, Harwich, and Chatham. They also compete against non-league schools such as, St. Georges, Tabor, Falmouth (Maine), Cape Cod Academy and Hotchkiss. Coach Burr said there are more than 100 teams in New England sailing at the varsity high school level. “Our goal every year is to make it into the Mark Trophy regatta, the New England team racing championships at the season’s end. Only eight teams qualify for that event.”

In the high school races, the men and the women race together, which is the case at the college level as well. Mr. Callen said that sailing is the only pure Title 9 sport at the NCAA level, with men and women competing at the same time, on the same field of play, and with the same equipment.

Mr. Callen said the MVRHS sailing program has come a long way since its founding. “In 2011 for the first time, an MVRHS graduate, Emily Reich, reached All American status competing at a NCAA Division I college, Old Dominion,” he said. Emily sailed competitively at the high school, first under the previous coach, Doug Heil, and finished under Andrew Burr.

Mr. Callen pointed out that at least 90 percent of the high school sailors learned to sail at the Sail MV summer program, a sailing program that is free for Island kids. He said, “We are incredibly proud to be a part of what has been accomplished here over the years and incredibly grateful for all the support we have received from so many people to make this happen.”

The new boats have been a long time coming. The young sailors, maybe not in their new jackets, will only have to wait until next week, when practice begins, to run up the sails on their new boats. 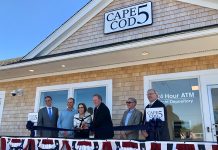