The Dockside Inn has never looked so good, according to partners Caleb Caldwell and John deBettencourt Tiernan, who bought the dated 21-room hotel in January. Since then they have spent more than $10,000 per room, $250,000 total, refurbishing and upgrading the entire hotel. Mr. Tiernan said they are now proud to call the Dockside Oak Bluffs’s first boutique hotel. Their company is called the Griffin Madison Corporation.

The new interiors were designed by Tray Overbeck Stead, a noted interior designer based in Austin, Texas, who also lives on the Vineyard. She has designed interiors for a world-wide residential and commercial clientele including several large hotels. Much of the interior work and furniture was custom-built for the project.

Significant updates and improvements at the property include a state-of-the-art online reservation system, 24/7 telephone reservation capability, market-sensitive pricing, upgraded website and brochure, all new linens, furniture, fixtures, plumbing and lighting, new landscaping, and an updated paint palette inside and out, according to Mr. Tiernan. “The only thing we saved from the old hotel was a little bell that customers ring or service.”

They offer several unusual services. Mr. Caldwell’s 1956 Rolls Royce Silver Cloud, which they park outside the hotel, is used to transport hotel customers free of charge, and they offer their own “virtual concierge,” named Loomis, who is a text messaging service for guests that will answer almost any question. Loomis also blogs.

Mr. Tiernan said that he likes the marketing end of the business and dealing with people. He said that he and Mr. Caldwell are “a dynamic duo.” Mr. Caldwell, who also owns the Nashua House and the Madison Inn, handles the operational side.

Mr. Tiernan said that his grandfather took the risk of mortgaging his property on Lyme Street, Sunset Heights, Oak Bluffs, to buy deBettencourt’s gas station 65 years ago. “I mortgaged the same property, I inherited it from him, to buy a business in the same town.” He recently renovated the Lyme Street house, built by his grandfather, where he, his wife, and new son live. He worked in the oil industry and for the Island Fast Ferry before diving into the hotel business.

Mr. Tierman said they have already had guests who have stayed at the old Dockside and who “are completely floored. No one has said they wish they had the old flowered wallpaper back. And we have not changed the prices of staying at the hotel.”

They plan to stay open until the first week of November. 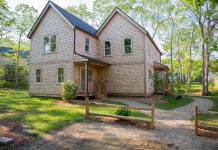