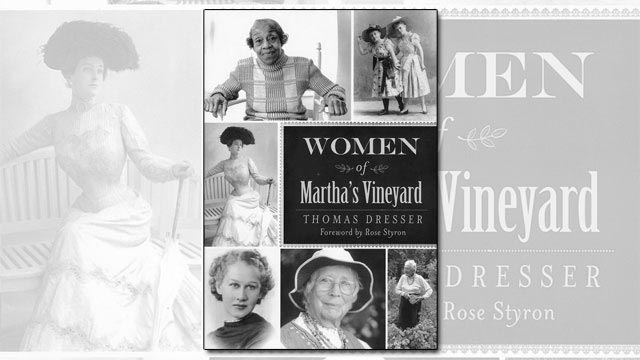 Women of Martha’s Vineyard by Tom Dresser, 160 pages (with foreword), softcover, $19.99 from The History Press, Charleston, S.C. 2013. Available at local bookstores and libraries, from the publisher, and from the author at thomasdresser@gmail.com

Tom Dresser of Oak Bluffs continues his string of accessible Island history books with “Women of Martha’s Vineyard,” complete with a foreword by poet and belletrist Rose Styron of Vineyard Haven.

Mr. Dresser is a meritorious writer who delivers well-researched, enjoyable reads — complete reads, if you will, on Island subjects about which we all know some things but not the complete thing.

In “Women of Martha’s Vineyard,” Mr. Dresser inventively links the lives of 15 important Island women in an overlapping chronology spanning 200 years. Beginning with Nancy Luce, an eccentric born in 1814, and concluding with teacher and Wampanoag icon Gladys Widdiss, who died in 2012, Mr. Dresser chronicles the lives of women who crafted full lives around the things they had passion about and made significant contributions to the culture and community we enjoy here today.

This book provides perspective for wash-ashores like me who know these names and lives but have them jumbled up. In this book, I learned who coined the term “wash-ashore,” that the name “Alley” is not descended from the Pilgrims, as I imagined, but from the Azores in the 19th century.

More importantly, this book could serve as a women’s studies text on self-empowerment. Every woman in this history either challenged or simply ignored the “little woman” societal role. That’s particularly true of women who came of age before the second half of the 20th century.

Mr. Dresser will discuss “Women of Martha’s Vineyard” in a series of appearances at Island venues, beginning May 8 at the Vineyard Haven Library.

While these women chose paths as diverse as the stage, teaching, and horticulture, Mr. Dresser discovered compatibility among the different personalities, he said in a telephone interview with The Times this week.

“Obviously, they shared a great love for this place,” he said. “They had great longevity and were loyal and faithful to their life passions. More than that, they were all performers of one sort or another. Nancy Luce was a recluse, not an actor as Katharine Cornell and Patricia Neal were. But Ms. Luce allowed, even encouraged, photographs of herself with her beloved chickens. And if you read Dorothy West’s newspaper columns, you get a strong sense of performance style.”

That sense of performing their lives left a clear image of their personas, in some cases, several generations later. “I got that [sense] talking with families of the women: that they were empowered women who stood outside the social norm and did what needed to be done and did it on their own,” he said.

“Women of Martha’s Vineyard” is Mr. Dresser’s sixth non-fiction book about the Island and his third on historical culture and mores. “The general idea for this book was that I knew a lot about a lot of people but interviewing their children and families brought a lot of insight and really brought people like Gladys Widdiss to life in a fresh way and broadened my understanding of her contributions.

“I didn’t come up with this book idea. It came from The History Press. I hesitated because I didn’t know if I could make a series of biographies into a book that would flow. So I looked for similarities: longevity, loyalty, faithful to their passions, love of the Vineyard. That characteristic of performance, often unintentional, is the most dramatic aspect that I learned that they shared,” he said.

A former teacher, health care administrator, and tour bus driver, Mr. Dresser’s persistence and devotion to the writing craft helps us understand the roots that hold this place together.