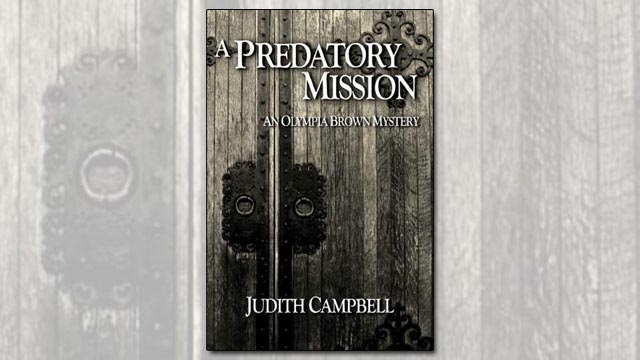 Ms. Campbell is also a Unitarian minister and served a stint as pastor of the Unitarian church in Vineyard Haven several years ago. The Vineyard is featured in each of the books, sometimes as the central setting for the story. In others the Island makes a cameo appearance, as it does in “A Predatory Mission.”

The Olympia Brown series has a unique niche in the mystery genre that has grown exponentially in form and texture from the days of cerebral sleuths created by Erle Stanley Gardner and Agatha Christie and the hardboiled private eye school of Mickey Spillane.

While we still have outsized heroes like Jack Reacher from Lee Child, there is growing reader contentment with heroes who are not sociopaths with good hearts but real people with a developed inner life.

That’s where Olympia Brown begins, but Ms. Campbell has developed the dramatic tension in her novels beyond good defeats evil, just in the nick of time. Ms. Campbell’s plotlines are constructed around relevant social issues that involve predatory villains whose deadly dysfunctions are inconvenient reminders of the human condition gone haywire.

Olympia Brown has found herself embroiled in cases of serial killers in medical environments, predation on the elderly, and in her latest book, the discomforting reality of sexual predation among the clergy.

In “Predatory Mission,” Ms. Brown is recruited to minister to a stunned congregation in a small Massachusetts town. Both the former woman minister and, shortly afterwards, a congregant and her children, have all gone missing.

The common thread is that the lives of both women have intersected with the minister of a neighboring church of evangelical bent led by a handsome and charismatic minister.

In the course of unraveling the mystery, we are also invited to experience the real life pastoral mission of tending to others who are in emotional and spiritual distress. Writers are always advised to “write what you know,” and that’s what you get here: real-life situations that we recognize or have encountered.

That’s not an accident. Ms. Campbell regards her mystery-writing as an extension of her ministry, a creative method of engaging the secular world with the life of the spirit. Be not afraid as a reader: these are not preachy, religious tracts. If that were the case, this correspondent would have run screaming into the night and someone else would be writing this review.

Olympia Brown books are not morality plays, they are about real stuff. Olympia understands what she is doing. A teenage unwed mother, Olympia, now in her 50s, has recently been reunited with her daughter and learning how to establish a relationship that includes her daughter’s adoptive parents.

Ms. Campbell holds advanced degrees in the arts and writing and uses several classic characters and sub-plots, including her slightly ditsy British gentleman partner, a clerical best friend and, whimsically, a house ghost who communicates via the chimes in the mantel clock.

The yarns are good. There is no mystery about the identity of the villain. The tension comes in trying to catch the clearly psychopathic rascal before he strikes again.

What occurred to me while reading Olympia Brown novels is that the author has quietly shifted my perspective from a thriller junkie to a student learning about the human condition. Olympia Brown becomes a welcome person who offers a primer on how to be of service to myself and others.

I love the high adrenaline Matthew Scudder and Jack Reacher stories. Always will. But Ms. Campbell offers me a different, gentler, and valuable experience.