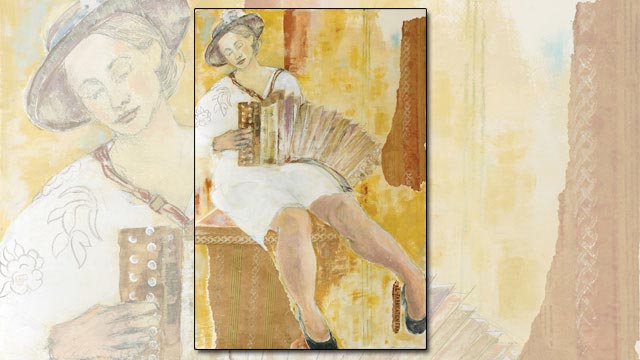 Jeanette Demeestère returns to the Chilmark Library with Dinner in Mexico, an exhibit of recent paintings and collages on paper focusing on the world of women. Her show opens August 3 with a reception from 3 to 5 pm and runs through August 23. The artist’s work last appeared at the library in 2009.

Ms. Demeestère, who divides her time between Paris and Chilmark, brings to life the way women look and interact in daily life in a series of works that demonstrate a strong sense of narrative composition and a sophisticated, romantic charm. The works on display share a muted, sandy-colored palette, which she says is often influenced by the shade of paper she is using.

The title for the current show comes from that of a striking collage in which two women gaze beyond the compositional frame, as if something has just caught their attention. It illustrates how narrative functions for Ms. Demeestère. The artist has placed a vintage photo of diners seated at a table in the background between the two women, who wear voluminous skirts, in white pastel. The black-and-white photo comments on the arrested motion of the two women at the same time that it reinforces the importance of line and outline in telling their story. While the women’s clothing may mask the bodies underneath, it does not obscure the underlying anatomy or its dynamics.

“We’re a group of four women painters in Paris,” Ms. Demeestère said. “We start by putting a nude model in different positions and sketching.” The subsequent drawings start out nude like the models, but then the artist dresses them. “It’s a little like playing dress-up with dolls.”

Many of the works in the current exhibit incorporate snippets of decorative paper or wallpaper, which add texture and visual interest. In “Dinner in Mexico,” for instance, she used pieces of 18th-century French wallpaper.

“A friend gave me samples — they are hand-painted — from the house she was renovating,” the artist said. In another collage, “Accordian,” she has taken a paper’s pattern and repeated its lines elsewhere in the composition. The color of the paper used in “Siena” provides a pattern for part of one figure’s skirt and part of a chair for a second figure, as well as the color for their hair.

“I go to all these stores and look for paper,” Ms. Demeestère said. “In London they have great paper stores.” The artist draws on a variety of other sources to introduce patterns into her work. She has used the imprint label from an antique Russian bond, part of a letter from her grandfather to his father, designs from Moroccan henna tattoos, and Arabic script drawn by a friend.

Although Ms. Demeestère, whose father was an artist, has been drawing for her own pleasure since childhood, she did not begin working seriously as an artist until her daughter left for college 15 years ago. After studying art and literature at Berkeley and receiving an M.A. in literature there, she married and moved to Paris, becoming a professor of American Literature at the Institut d’Etudes Politiques. Two of her friends asked why she was teaching rather than making art, so she turned her daughter’s room into a studio. Since then, she has exhibited at the Art et Littérature Gallery in Paris, as well as at the Chilmark Library.