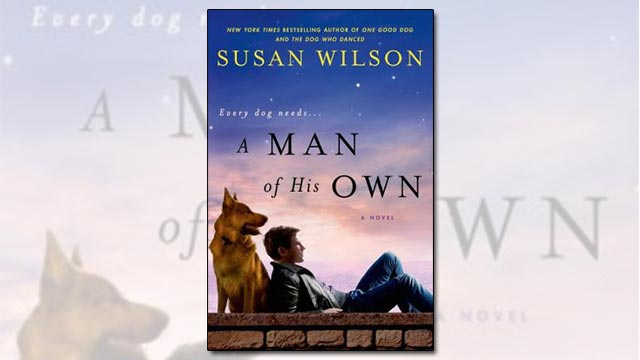 Oak Bluffs resident Susan Wilson’s fiction has always studied the aspects of love in our lives, and she has upped the literary ante in her eighth and latest novel, “A Man of His Own.”

In recent years, Ms. Wilson has used dogs as the standard for unconditional love with great success. Her previous two novels, “One Good Dog” and “The Dog Who Danced,” are stories of broken people who discover how to love through relationships with dogs that show up in their lives and teach them by example that unconditional love is a powerful healing force, regardless of species.

Perhaps the core of it all is the simple truth in my friend Nick Thorne’s observation that, “You can’t out-love a dog.”

In this novel, Ms. Wilson gives us a look at love in its various forms with Pax, a foundling shepherd, as the true north of the emotion. Her ability to manage the nuances of romantic love, familial love, and — dare we say it? — forbidden love. She has also researched the role of canine warriors in World War II and presents a look at daily life in pre- and post-war America.

I am grateful for this well-done book because it is riven with examples of the power of love and the despair of lovelessness that I can relate to in my life. My dog is grateful for it because he has been reaping the rewards of my heightened awareness of his contributions to my life. Win-win, you might say.

“A Man of His Own” is not all win-win by a long shot. The story opens in Waterbury, Connecticut, where Rick Stanton is celebrating the end of his professional baseball season. He has been promoted to a higher-level minor league team next season with his eyes set on pitching for the Boston Braves (now the Atlanta Braves) major league team. He literally trips over eight-week-old Pax, abandoned in an alley behind a bar. Rick takes the puppy home.

Halfway across the country, Francesca Bell has decided to leave the Iowa farm life for the larger world, which turns out to be Boston, where she moves in with a cousin.

Keller Nicholson, the third central character, is also in Boston. He’s never been anywhere else. Orphaned by a car accident, Keller has been the classic no-love recipient, handed off from relative to relative, pitched into reform school at nine, then claimed by a great-uncle at 16 to work for him, lobstering and bottom fishing off the North Shore of Boston.

Braves rookie pitcher Rick and Francesca meet at a ballgame in 1940. They marry quickly amid storm clouds over Europe. Then, Pearl Harbor. Rick was slated to be a starting pitcher for the Braves in 1942 but becomes a combat platoon leader in Italy instead.

High school senior Keller sees the war as an escape from forced labor under a bitter old man and enlists with the idea of being a dog trainer and handler. About 10,000 of 14,000 dogs donated by their owners for the duration of the war were used for guard duty, combat patrol, and mine detection.

Francesca donates Pax, who teams with Keller on a combat patrol team. Both Keller and Pax are non-critically wounded but return from the war, after which Keller is duty-bound to return Pax, who has provided the only love he’s experienced, to his owners.

Rick and Francesca are home. Rick has been seriously wounded. Paralyzed, his pitching arm blown off, Rick is in the throes of what we now know as PTSD. The effortlessly happy husband has become seriously depressed, angry, and shut down.

Rick wants his dog back. Keller wants to keep him. Francesca offers a compromise. She needs help caring, cleaning, and moving her husband. Keller needs a job – and they all get to share Pax. Good deal, except…

Keller and Francesca develop, you know, feelings for each other, and now Ms. Wilson has offered another facet of love — sexual desire and the hunger for comfort between two people who have experienced unconditional love, lost it, and want it back.

The rest of the story unfolds in a few post-war years, then extends decades into the millennium. My policy is not to reveal endings, but as I read to the end, I asked myself how I would have handled the Pax conundrum, how I would have reacted if I were Rick or Keller or Francesca in this triangle.

Rights, responsibilities, and character. The power and pain that comes from giving and receiving love.