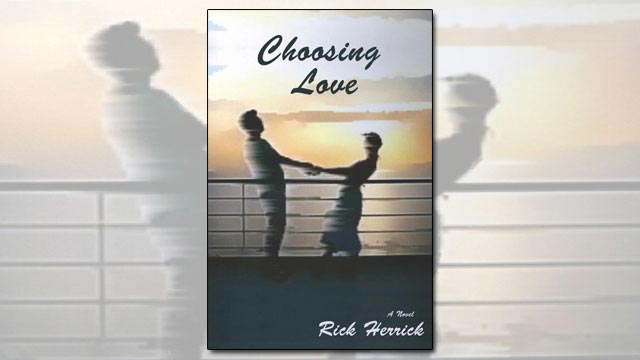 Twelve years ago, a friend told me that cold turkey recovery from an evangelical Christian childhood was not a slam dunk. “There oughta be a 12-Step program for us,” he said. He was not kidding.

“Choosing Love,” the fourth book and third novel by retired Tulane University PhD professor Rick Herrick, gives us the down and dirty on what can happen when religion-on-steroids is, or has been, part of your life.

Personally, Mr. Herrick, an Oak Bluffs resident, delights in, as he puts it, “trying to understand the New Testament and living the love that Jesus preached.” Wait …WAIT!… don’t leave yet. The guy is a normie, he’s making sense here. His principal point is that the Jesus message was to live in love, not in fear and the related behavioral byproducts of fear, including resentments, anger, control, greed, power surges, and fanatical religious belief systems.

“Choosing Love’s” plot plays out the effect and impact of fanatical religious beliefs on the Hathaways, a high-visibility evangelical family in Steamboat Springs, Colo. William, the patriarch, owns a Christian radio network and ancillary businesses. Son Billy is a pastor of a nearby 1,000-seat evangelical church. Mom is a loving woman who has become collateral damage. Daughter Karen, however, is of a different stripe.

A political science graduate of Denison University in bucolic Ohio, Ms. Denison is working as an aide in D.C. to a Colorado congressman who is in Dad’s pocket. She is not happy and she is confused. Her lecherous, grifting male colleagues praise the Lord while trying to bed her. Her religious upbringing and her moral instincts are at war. She doesn’t buy the program to which her Dad has conditioned her for 25 years and wants to find her own voice and values. She books a windjammer vacation for two weeks from Boston to Prince Edward Island in Canada as a head-clearer.

On the cruise, she meets Patrick McGovern, from a sprawling Irish Catholic Boston blue collar family. They hook up on the voyage and before you can say “belay that!”, Karen is preggers. Problem: Catholics are just below lepers in the Hathaway social order, and pregnant to boot? Back in the day, Dad wouldn’t let 15-year-old Karen go bowling with a kid because “he doesn’t belong to our church.”

So why did Karen fall for Patrick? Because he was confident, had a voice, knew what he believed, and lived in love. A breath of fresh air after a life spent seeking love from a father who was expert at doling out conditional love when her accomplishments suited him. Raise your hand if any of this rings a personal bell.

Turns out that while William is being self-righteous, he’s been busy screwing his late brother’s wife out of her share of the family broadcast business. Working that skulduggery out is an interesting story that Mr. Herrick carefully researched, using a fictionalized real case.

And that’s not all he’s researched. Mr. Hathaway is also a board member of The Family, a real life organization publicly known as The Fellowship, an international fundamentalist group of power brokers and rich guys who make things happen behind the scenes, here and overseas. A reporter named Jeff Sharlet wrote a book about The Family and Google has the story as well. Look it up, it’ll give you pause.

Back to our lovers. Karen and Pat are blessed with a Down syndrome baby girl who is avoided by Grandpa Hathaway since little Maggie is clearly God’s punishment for pre-nuptial canoodling. Karen knows the true reason: Dad requires publicly perfect people and events in his life.

Over five years, Karen is restored by the atmosphere of love in her relationship with Pat and kids. She discovers a mentor who schools her on the difference between religion and spirituality and how to pursue a spiritually fulfilling, happy life.

“Choosing Love” is not a perfect read from a literary standpoint. Mr. Herrick uses too many words describing externals of locales and activities, for example, but that’s fixable, a function of wordsmithing. His gift is the understanding of spiritual interiors and describing them appropriately. The characters ask themselves and each other questions that we’ve all asked.

My friend? Well, he’s dialed down the drama, spruced up his interior life, and he spends a fair amount of time helping others — in the spirit of love, as it were.