“Green Light At The End of The Tunnel: Learning The Art of Living Well Without Causing Harm to Our Planet and Ourselves” by Anna Edey, Trailblazer Press, 2014.

We live in abject fear. Cars, planes, and everything else that runs on fossil fuels have loaded up our atmosphere with lethal amounts of carbon dioxide — enough to melt glaciers, froth hurricanes, and tip the earth off its axis. Plus those fuels that run those cars that each individual on this planet needs parked in his or her driveway, ready for the next quarter-mile trip to the pizza joint, these fuels, as every one one of us knows, hustle us into war after war as we guard the oil derricks in whatever Middle Eastern principality pockets our dollars, and grins and bears us.

And then there’s the threat of biomass destruction from underground: the nitrogen, pesticides, and innumerable other toxic substances pouring into our rivers, lakes, and oceans.

The science has long been in. We’re screwed. And as more people, e.g. more polluters, are added to the population by the billions, we’re doomed even more than we were the day before because the madness — the CO2 and the nitrogen and the deathless plastics — get churned out in still more unfathomable quantities.

We’re beyond doomed. We’ve abandoned all hope. It’s over or almost over. It’s only a question of whether our children or our grandchildren will be the last to turn off the lights.

But what if we could rescue ourselves one by one, living in ways that were both comfortable and sustainable and which miraculously require near-zero fossil fuel, that emit near-zero carbon monoxide and other poisons into our atmosphere? What if there were visionaries around the world finding ways to live that do no harm to the environment, and what if one of these visionaries dwelt here on the Island?

And what if, finally, this new groundbreaking (but not ground destroying) way to live was pretty as a Christmas hearth in Edwardian Wales?

Anna Edey, originally of Sweden, learned gardening at her grandmother’s knee, especially when that knee was planted on her Swedish soil. Ms. Edey, a young weaver by trade, met and married an American man, and moved to the States in 1957. The marriage fell by the wayside, but by the 70s, Ms. Edey, now living in West Tisbury with two young daughters, fell in love with organic agriculture. She built a solar-powered greenhouse, Solviva, and wrote about it in a book of the same name.

Now, after many decades of re-invention, tinkerings, decisions, and revisions, she has put together a compendium of what we need to know and do to jump off the gas-and-all-other-pollutants-and-earth-destruction grid. It’s all laid out in Ms. Edey’s new book, “Green Light At The End of The Tunnel: Learning The Art of Living Well Without Causing Harm to Our Planet and Ourselves.”

You might think that a 304-page extra-wide tome with this much info, so many diagrams, unending data, photos, and drills would be as harrowing to read as a textbook for chemistry PhD’s but, on the contrary, for any of us abject fear-mongers and abandon-all-hope freaks, “Green Light” is a work of shock and awe. It’s gorgeously designed, cleverly written, and infused with an almost supernatural amount of inspiration. You will put it down only in the event of a fire drill and, shortly into it, you will, guaranteed, make a plan to design a Solviva house for yourself in as near the future as possible.

Here’s what a better future looks like in the form of Ms. Edey’s most recent domicile called The Sanctuary: On its coldest day of 7 degrees below zero, inside the small two-story house, the air and indoor pool stays at 70 degrees and 84 degrees respectively, without any heating fuels and without emitting an iota of carbon dioxide. This is achieved with solar photovoltaic (PV) panels, and fans run by energy produced by said panels. The roof contains of two layers of copper pipe, which heats the pool as effectively as a 5,500-watt pool heater would normally do.

As Ms. Edey explains, “The Solviva Composting Flushtoilet” (observe the word flush for all you eew! folks) “drains into two successive Biocarbon filter bins below, where the solids are retained and composted, and the liquid continues to the Greenfilter bed.”

My own favorite feature of the house is the adjoining chicken room where hens add avian warmth to the air, lay eggs, and keep their next-door humans happy with their company. Virtually every Solviva design has a henhouse attached, and when you read why you’ll run out to get one. Many of the Solviva designs are bracketed as “business opportunities,” a spur to idealistic millennials or people of all ages looking to jump into fields that nurture the environment rather than exploit it.

Ms. Edey has figured out how to recycle — to great advantage for both flowers and food crops — every last bit of waste produced by our bodies as well as such manufactured elements as algae-based plastics. And she espouses the electric car – she herself owns a Nissan Leaf – as another great savior of our despoiled planet. The technology was in place before the rise of the internal combustion engine, and electric charges, either outside the solar-paneled home, or at locations such as the large PV hookups ringing Cronig’s Market, make this fully feasible.

“Green Light” will help you to just say no to fracking, Fukushima, the BC spill, and GMOs, and yes to lady bugs and other good bugs to munch up all the aphids and other bad boys, hence reducing all need for pesticides, yes to capillary irrigation tubes to save our aquifers from drying up, and yes to PVs on every last rooftop in every last nation in every last part of the Milky Way.

You’ll put down this book and you’ll no longer wish to live Madonna’s life or Prince William’s life, you’ll want to beam yourself into a Solviva-design home with indoor veggies growing up the ying-yang, sumptuous outdoor gardens created from your own home’s green-treated effluvia, no electric bills, no propane top-offs in amounts that make the blood drain from your face, and no harm done to the air, earth, and sea.

And not forgetting those cute fat happy chickens next door. 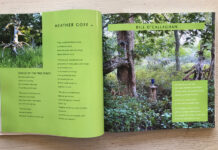